Capacity may get tighter at the same time shippers want to push freight out the door in advance of the end of Q1. 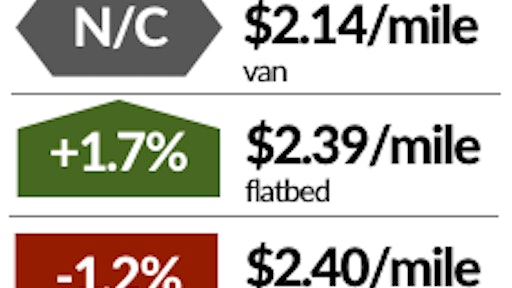 The number of loads on the spot truckload freight market surged 7.6 percent during the week ending March 3 as rates appear poised to rebound.

After seven weeks of declines, the national average spot van rate was unchanged at $2.14/mile but rates rose on 66 of the top 100 van lanes. Van load posts increased 4 percent while truck posts declined 1 percent. At 7.0 loads per truck, the van load-to-truck ratio is about three times higher than it was at this time last year.

The national average reefer rate fell 3 cents to $2.40/mile but the number of available loads was 11 percent higher than the previous week and truck posts declined 3 percent. Reefer load counts are roughly equal to where they were in mid-January.

Flatbed rates rose 4 cents to $2.39/mile, an increase for the fourth straight week. Capacity continued to tighten and the load-to-truck ratio for flatbeds hit its highest point in years. Extremely strong markets include Atlanta, Birmingham, Memphis, Green Bay, and Cleveland. The national average rate is up 9 cents per mile in the first few days of March.

Capacity may tighten in the weeks ahead with the end of Q1 coinciding with both Easter weekend and the April 1 end of the phase-in period for the ELD mandate.