Spot market truckload rates got off to a hot start in January but quickly chilled once a seasonal lull took hold in the middle of the month. 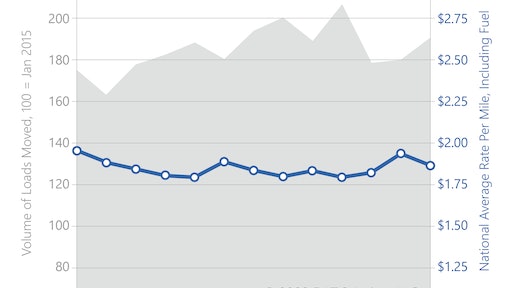 Spot market truckload rates got off to a hot start in January but quickly chilled once a seasonal lull took hold in the middle of the month. Prices for dry van and refrigerated (“reefer”) shipments fell compared to December 2019 but volumes actually increased, according to the DAT Truckload Volume Index. Flatbed freight volumes and the national average flatbed rate were both up slightly in January compared to December.

Pent-up demand after the busy holiday season kept truckload prices high in the first half of January. As more capacity became available in the second half, the competition for freight drove rates down quickly.

While the drastic mid-month swing was unusual, the overall trend for the month was not. Higher truckload freight volumes are common for January and so are lower rates.

Spot rates have declined in January for all but one of the past 10 years.

Compared to December, the national average dry van rate dropped 7 cents per mile in January to $1.70 including the fuel surcharge. The rate was 25 cents lower compared to January 2019, when the pricing environment was exceptionally strong. The national average reefer rate lost 6 cents month over month at $2.24 per mile, while the flatbed rate gained a penny to $2.17 per mile. Compared to January 2019, the average reefer rate was down 6 cents and the flatbed rate declined 17 cents.

“It’s been a long time since we’ve seen positive year-over-year comparisons for truckload rates,” explained Adamo. “Our rate forecasting models show that this will change in the spring, and we will start seeing year-over-year increases for the first time since September 2018.”

The DAT Truckload Volume Index reflects the change in the number of loads with a pickup date during that month; the actual index number is normalized each month to accommodate any new data sources without distortion. Baseline of 100 equals the number of loads moved in January 2015, as recorded in DAT RateView, a database of rates paid on an average of 3 million loads per month. DAT national average spot rates are derived from RateView and include only over-the-road lanes with lengths of haul of 250 miles or more. Spot rates represent the payments made by freight brokers and 3PL to the carriers.

This collaboration will accelerate the commercialization of autonomous delivery fleets while contributing to a safer and more sustainable logistics community in the future.
Gatik
April 6, 2021

ClearPrism reports the canal blockage will affect approximately 25% of the U.S. gross domestic product (GDP) value, and the ripple effect will result in impacts on another 15%.
ClearPrism
April 3, 2021
Follow Us