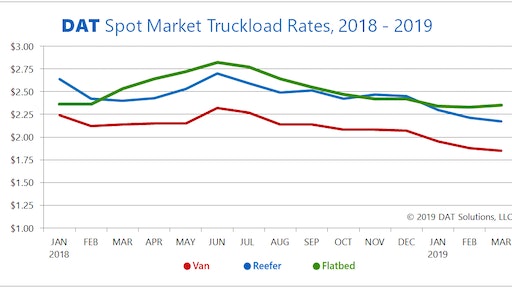 Despite a seasonal increase in freight volume, rates slipped lower for van and reefer freight on the spot market in March, due partly to extreme weather and other disruptions. Flatbed rates rose, however, signaling the likelihood of a rebound for all freight in Q2.
DAT

“We anticipated a bigger increase in demand for trucking services, but unexpected events, including flooding in the Midwest and a major tank fire in Houston, prevented the typical surge of shipments ahead of the close of Q1,” said DAT Senior Industry Analyst Mark Montague. “As a result, truckload rates were lower than expected in March.”

While freight volume increased 3.7 percent for vans and 2.1 percent for reefers compared to February, the national average spot (non-contract) van rate fell 3 cents to $1.85 per mile and the reefer rate declined 4 cents to $2.17 per mile.

Flatbed freight was the strongest segment of the three, with a 10 percent increase in demand for available trucks. The national average spot flatbed rate increased 2 cents to $2.35 per mile month over month. Flatbed freight includes construction materials, heavy equipment, and freight related to oil and gas markets.

Year-Over-Year: Freight Is Abundant, So Are Trucks

“Overall freight availability reflected a solid economy during the month of March, with van freight volumes increasing more than 6 percent during the last week of the month,” Montague said. “There was enough capacity to cover the demand, and as a result rates did not rise as expected for this time of year.”

About the DAT Freight Index

The DAT North American Freight Index is based on load counts and per-mile rates recorded in DAT RateView, with an average of 3 million freight moves per month. Spot market information is based on transactions arranged by third-party logistics (3PL) companies, while contract volumes and rates are arranged between shippers and carriers, with no intermediary.