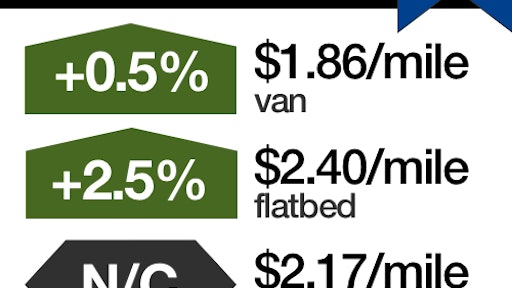 One reason for the increased supply of trucks: slow produce harvests have prompted reefer carriers to compete for spot van freight.

Diesel prices increased a penny to $3.09 per gallon.

Van volumes declined compared to the previous week—not unusual for early April, since there was extra activity in late March for the close of Q1. There are actually more van loads moving on the spot market than at this time last year.

But there are also plenty of trucks available. The van load-to-truck ratio declined last week to 1.3 loads per truck.

Markets to watch: Rates rose on just 38 of the top 100 van lanes while 58 lanes fell and four were unchanged. No lanes in the top 100 rose by more than 10 cents per mile, although two notable lanes were close:

Pricing has been volatile on individual lanes but the national average reefer rate was unchanged last week. On the top 72 reefer lanes, rates on 36 were up, 33 were down, and three stayed the same.

Markets to watch: In Florida, Miami outbound volumes jumped 23 percent last week and were nearly 9 percent higher from Lakeland. But the Miami market (south Florida) had lots of trucks, which kept rates from rising, while Lakeland to Atlanta jumped 23 cents to $1.66/mile.