The number of loads posted on the DAT network of load boards fell 2 percent during the week ending Oct. 20, while posted capacity edged up 1 percent. 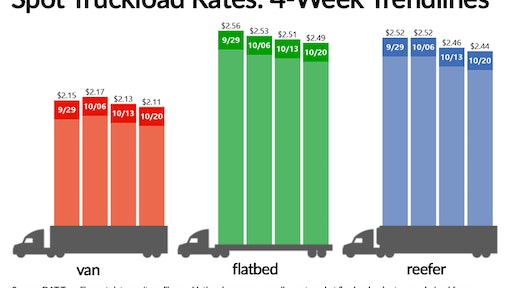 The number of loads posted on the DAT network of load boards fell 2 percent during the week ending Oct. 20 while posted capacity edged up 1 percent. The combination of less freight and more trucks helped drag down national average spot rates for all three equipment types compared to the previous week, with the spot van rate hitting its lowest point so far this year.

National average spot truckload rates declined across the board:

Van load and truck posts were virtually unchanged compared to the previous week, although average outbound rates from most van markets were down. On the top 100 van lanes, 64 lanes were lower, 29 were higher, and seven were unchanged.

A notable exception was Los Angeles, with nearly 6,000 van load posts on Friday alone. The monthly average load-to-truck ratio for L.A. is 5.0, but last week it jumped to 8.4. In mid-September, Typhoon Mangkhut swept through the Pacific, which delayed ships leaving ports in Hong Kong and southeastern China. Those ships arrived late at the ports of Los Angeles and Long Beach, which receive almost 50 percent of Asian imports to the United States. The delay means cargo is just starting to leave warehouses near the ports. Contract carriers are not always able to adjust their schedules, which means there’s more freight available for spot market trucks.

Reefer load posts were down 3 percent last week while truck posts increased 1 percent. On the top 72 reefer lanes, 48 experienced lower prices, 20 were higher, and four were neutral. Many lanes have been affected by waning harvest:

Flatbed load posts were down 3 percent from the previous week while truck posts on DAT load boards increased 4 percent. Prices on major flatbed lanes more balanced than they were for vans and reefers: among the top 78 flatbed lanes, 42 lanes moved lower, 35 were higher, and one was neutral.