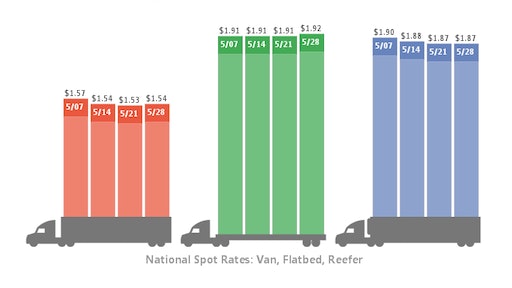 The number of posted reefer loads increased 19 percent as available capacity declined 5 percent, compared to the previous week. The result was a 4.1 reefer load-to-truck ratio, a 25 percent increase.

National average truckload van and flatbed rates each rose a penny on increased demand for capacity during the week ending May 28, according to DAT Solutions, which operates the DAT network of load boards. An 8.5 percent increase in the total number of available spot loads and higher diesel prices also played key roles in the spot rate picture.

The number of posted reefer loads increased 19 percent as available capacity declined 5 percent, compared to the previous week. The result was a 4.1 reefer load-to-truck ratio, a 25 percent increase.

The national average reefer rate was unchanged at $1.87 a mile despite a seasonal increase in demand.

At $1.54 per mile, the national average van rate rose 1 cent. Rates rose sharply on many high-volume lanes, however. By region, leading markets for average outbound spot rates include:

Flatbed load availability dipped 0.5 percent while capacity increased 8 percent last week. That led to an 8 percent decrease in the flatbed load-to-truck ratio at 14.2 loads per truck. The national average flatbed rate increased 1 cent to $1.92 per mile.

Load-to-truck ratios are a sensitive, real-time indicator of the balance between spot market demand and capacity. Changes in the ratio often signal impending changes in rates.