The national average rate for reefers stayed at $2.12 per mile, with both the average line-haul rate and the fuel surcharge unchanged. 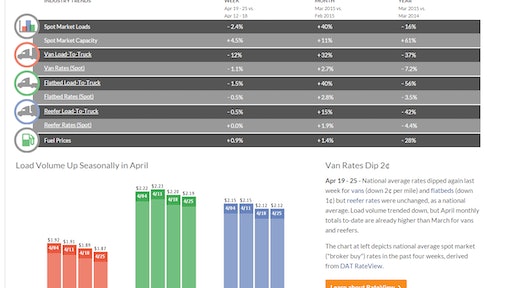 The number of available loads on the spot truck load market decreased 2.4 percent and capacity increased 4.5 percent during the week ending April 25, according to DAT Solutions, which operates the DAT network of load boards.

Spot van and flatbed rates continued to soften while the average reefer rate was unchanged compared to the previous week.

Nationally, the average van rate fell for the fourth straight week, dropping 2 cents to $1.87 per mile as capacity increased 5.7 percent and the number of available loads fell 7.4 percent. The average van load-to-truck ratio lost 12 percent to 2.6, meaning there were 2.6 available van loads for every truck posted on the DAT network.

The national average rate for flatbeds also slipped, dropping 1 cent to $2.19 per mile. The decline was in the line-haul rate; the fuel surcharge was unchanged from the previous week. Flatbed load availability edged down 0.7 percent last week while capacity gained 0.8 percent, which sent the flatbed load-to-truck ratio down 1.5 percent to 20.7 loads per truck.

The national average rate for reefers stayed at $2.12 per mile, with both the average line-haul rate and the fuel surcharge unchanged. The number of available reefer loads fell 3.8 percent and capacity added 4.4 percent; the load-to-truck ratio was flat (down 0.5 percent) at 5.9 loads per truck.

Rates are derived from DAT® RateView, which provides real-time reports on prevailing spot market and contract rates, as well as historical rate and capacity trends. For complete national and regional reports on spot rates and demand, visit dat.com/Trendlines. DAT Trendlines is a weekly report on spot market freight availability, truck capacity, and rates.