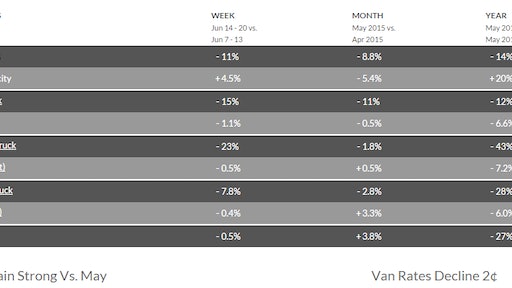 Average spot truckload rates dipped during the week ending June 20 but remain well above the averages for May, according to DAT Solutions, which operates the DAT network of load boards.

The number of van load posts declined 13 percent and available van capacity increased 3.2 percent last week, driving the van load-to-truck ratio down 15 percent to 2.0 loads per truck, meaning there were 2.0 available van loads for every truck posted on the DAT network.

Van rates responded by declining 2 cents to $1.88 per mile, the first change since a 5-cent increase during the first week of June. Average outbound rates rose in several key markets including Los Angeles, up 5 cents to $2.15 per mile, and Columbus, up 4 cents to $1.85 a mile.