The robust supply of van and refrigerated truckload freight in May and June, combined with higher spot market rates and load-to-truck ratios, are signs that the freight recession is over. 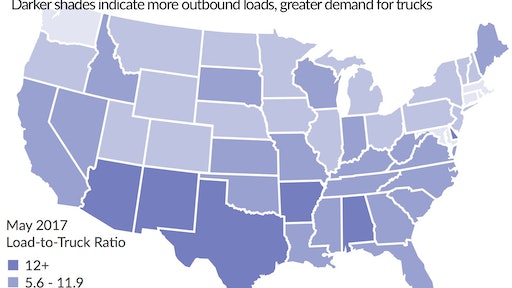 The robust supply of van and refrigerated truckload freight in May and June, combined with higher spot market rates and load-to-truck ratios, are signs that the freight recession is over.

Driven by an abundance of produce, freight volumes show no signs of abating. By the middle of June, the national load-to-truck ratio was the highest it’s been in three years, and the reefer ratio topped 10.0, meaning there were 10 loads on the DAT network of load boards for every posted truck.

Regionally, California continues to set the pace for reefer activity, and Texas, the southeast and Plains states are in that 12.0-plus load-to-truck range. Reefer carriers should stay busy until at least the Fourth of July, when freight volumes typically begin to taper off until November and December.