As Chinese consumers' desire for fresh foods and other perishables grows, the country's fragmented and inefficient cold chain can't keep up. 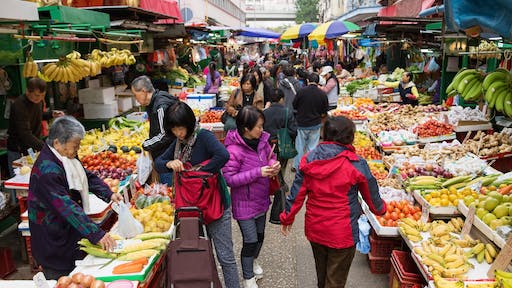 While Chinese people want more fresh foods, a lack of cold chain infrastructure means that those who live in remote areas are less likely to enjoy this bounty.

As China continues its transition from a manufacturing-led to consumer-led economy, and its middle class grows larger and stronger, the desire for fresh foods, pharmaceuticals and other perishables is growing along with it. Unfortunately, the Chinese suffer from a fragmented, inefficient cold chain that can’t keep up.

China accounts for 17 percent of U.S. agriculture exports, making it the largest agriculture export market for the United States. At nearly $1.4 trillion, agriculture comprises more than 10 percent of the Chinese economy, but the country’s massive size and population, along with a lagging infrastructure in some of its more remote areas, make it difficult to expand cold chain.

The Chinese cold chain market has grown more than 20 percent over the past five years, according to research from London-based global management consulting firm, L.E.K. Consulting. The market has grown from 80 billion Ren Min Bi (RMB) or $11.73 billion in 2011 to 160 billion RMB ($23.5 billion) in 2015. L.E.K. forecasts that the cold chain industry will be valued at 400 billion RMB ($58.6 billion) by 2020, with transportation making up 40 percent of the market, cold storage at 30 percent, and the remainder of the market covering other services.

Despite this remarkable growth, the development of China’s cold chain industry is still young, and truth be told, can be an intriguing market for investors, third-party logistics providers (3PLs) and other logistics firms. The market is extremely fragmented; the China Federation of Logistics and Purchasing Cold Chain Logistics Committee estimates that revenue from the top 100 cold chain logistics companies accounts for less than 10 percent of the overall market.

Although the market is growing, the unreliability and “breakage” of the cold chain remains a concern. As ownership of each stage of the cold chain—warehousing, ground transportation, airfreight, airports, distribution and other services—is fragmented, the lack of an end-to-end process control results in widespread mismanagement of logistics. Additionally, the use of temperature-monitoring technology, information systems, and other forms of technical assistance is still very immature. As a result, the rate of cargo damage to fresh product within the cold chain is as much as 20 to 30 percent—much higher than the average 5 to 10 percent in developed countries, L.E.K research says.

The Chinese government has taken a number of steps, in conjunction with industrial associations, to introduce a series of standards and policies to regulate and help develop its cold chain logistics market, which include:

The China Business Review points out that to keep up with the rapid growth of air transportation in the cold chain, a number of temperature-controlled warehouses have been built around airports and the surrounding Airport Economic Zone. Top domestic Chinese airports with cold storage capacity include Pudong Airport (Shanghai), Baiyun Airport (Guangzhou) and Kunming Airport. Additionally, firms such as Xiamen Wanxiang Cold Chain Logistics Centre, Central China Hub of Frozen and Fresh Produce, and Hangzhou Pharmaceutical Logistics Park of Stater Logistics have invested heavily in cold storage infrastructure in the surrounding Airport Economic Zone in recent years.

Hochfelder is a freelance journalist who has covered a variety of industries in his career, including supply chain. He also served as the former editor of Supply and Demand Chain Executive. Hochfelder is based in Arlington Heights, Illinois.