An unusual surge of truckload freight led to higher-than-normal volumes on the spot market to round out the month of July. 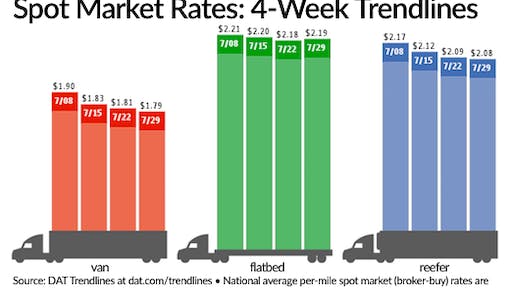 An unusual surge of truckload freight led to higher-than-normal volumes on the spot market during the week ending July 29, said DAT Solutions, which operates the DAT network of load boards.

The number of available loads increased 2 percent, while truck posts edged down 2 percent compared to the previous week. National average load-to-truck ratios stayed firm: the van load/truck ratio was 5.3, up from 4.8, while flatbeds remained at 36.1, and reefers held at 8.5.

Typically, July is a month when spot truckload freight activity begins to decline.