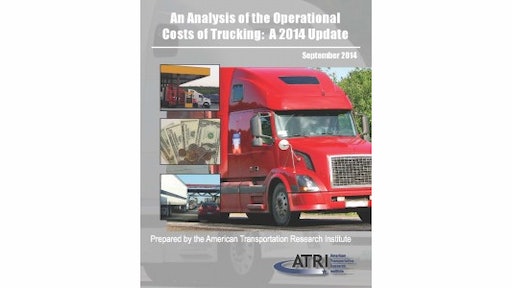 The American Transportation Research Institute (ATRI) released the findings of its 2014 update to An Analysis of the Operational Costs of Trucking. The research, which identifies trucking costs from 2008 through 2013 derived directly from fleets’ financial and operational data, provides motor carriers with an important high-level benchmarking tool and government agencies with real world data for future infrastructure improvement analyses.

The average marginal cost per mile in 2013 was $1.68, an increase from the $1.63 found in 2012. After the Great Recession and a sharp decline in fuel prices resulted in decreased industry costs between 2008 and 2009, costs steadily rose through 2010 and 2011, with a slight decline in 2012. The increase in average operating costs in 2013 is attributed to the ongoing driver shortage and the resulting wage increases by motor carriers to ensure retention of experienced, qualified drivers.

Since its original publication in 2008, the Operational Costs of Trucking reports continue to be one of the most requested ATRI reports among industry stakeholders. In addition to average costs per mile, ATRI’s report documents average costs per hour and includes cost breakouts by industry sector. Also new this year, ATRI is publishing a one-page fact sheet with the key findings of the report.