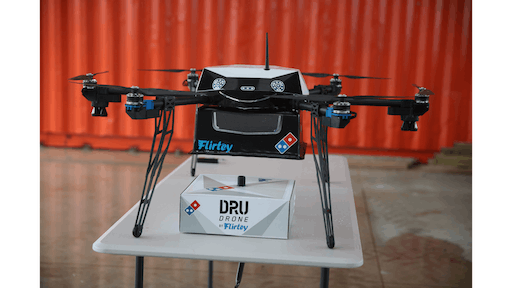 Domino's has repeatedly invested in new delivery technology, including DRU, the Domino's Robotic Unit, a land-based delivery robot. With the announcement of the partnership with Flirtey's air- based drone delivery service, Flirtey and Domino's are demonstrating an ongoing commitment to innovative delivery methods for their customers.

Domino's Pizza Enterprises Limited has teamed with Flirtey on the first commercial pizza-by-drone delivery model. The two companies exhibited the first stage of their partnership with a demonstration of pizza delivery by drone in Auckland, New Zealand last week. The successful demonstration was also attended by the Civil Aviation Authority and Minister of Transport Simon Bridges.

The Flirtey drone conducted an autonomous flight to deliver a hot Domino's pizza, showcasing the scalable drone delivery technology developed by Flirtey. The demonstration was conducted under Civil Aviation Rules Part 101 and marks a final step in Flirtey's approval process, following which the partnership will expand with flights to customer homes later this year from a select New Zealand store.

Beyond demonstrating Flirtey's leading drone delivery service and safety technology, the delivery also utilized state-of-the-art packaging that retained the temperature and taste of the freshly-cooked pizza during the delivery.

Flirtey's autonomous technology will allow the system to scale rapidly for a delivery- based business like Domino's, which recently opened its 100th store in New Zealand. Domino's Pizza Enterprises operates more than 2,000 stores in seven markets: New Zealand, Australia, Belgium, France, the Netherlands, Japan and Germany.

Domino's has repeatedly invested in new delivery technology, including DRU, the Domino's Robotic Unit, a land-based delivery robot. With the announcement of the partnership with Flirtey's air- based drone delivery service, Flirtey and Domino's are demonstrating an ongoing commitment to innovative delivery methods for their customers.

"Launching the first commercial drone delivery service in the world is a landmark achievement for Flirtey and Domino's, soon you will be able to order a Flirtey to deliver your pizza on-demand," said Matt Sweeny, CEO of Flirtey. "New Zealand has the most forward-thinking aviation regulations in the world, and with the new U.S. drone regulations taking effect on Aug. 29, Flirtey is uniquely positioned to bring the same revolutionary Flirtey drone delivery service to partners within the United States."

"Partnering with Flirtey to revolutionize the delivery experience is an achievement that will set our company apart in the minds of customers and change the way delivery is conducted around the world," said Group CEO and Managing Director Don Meij of Domino's Pizza Enterprises. "Domino's customers can expect the freshest and fastest pizza delivery service at the same quality they have come to expect from us thanks to Flirtey's industry-leading technology."

The Flirtey delivery drone is constructed from carbon fiber, aluminum and 3D printed components. It is a lightweight, autonomous and electrically-driven unmanned aerial vehicle. It lowers its cargo via tether and has built-in safety features such as low battery return to safe location and auto-return home in case of low GPS signal or communication loss. The personal, on-demand delivery service developed by Flirtey, using proprietary software and hardware, represents a new age of delivery for a new generation of consumer.

This partnership with Domino's follows Flirtey's recently signed partnership with 7-Eleven to deliver over-the-counter medicine and convenience goods in the U.S. Flirtey has also reached agreement with Samantha Sharif, former CEO at Aviation New Zealand, to join its New Zealand board to help drive rapid growth of operations. In addition, Flirtey is actively hiring drone operators and engineers in both the United States and New Zealand to help Flirtey reinvent the food delivery, medicine delivery, and online retail delivery industries.

Domino’s Is Going to Use Sidewalk Robots to Deliver Pizza