This announcement comes roughly a year after Pizza Hut became the first national pizza restaurant to remove artificial flavors and colors from its core pizzas in May 2015. 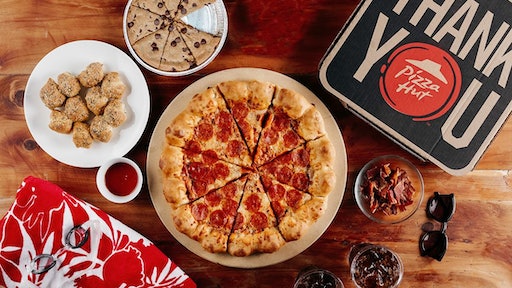 Artificial preservatives from cheese by the end of March 2017;

Antibiotics important to human medicine from chicken for its pizzas by the end of March 2017.

This comes roughly a year after Pizza Hut became the first national pizza restaurant to remove artificial flavors and colors from its core pizzas in May 2015. Pizza Hut has removed 2.5 million pounds of salt from its ingredients over the last five years.

“We believe that Pizza Hut food shouldn’t only taste great, but you should feel great about it, too,” said Jeff Fox, chief brand and concept officer, Pizza Hut. “Our enhanced and expanded commitment to superior restaurant-quality food is the result of listening closely to our customers, and they say that these are things that they do not want in their pizzas.

“Providing our customers with restaurant quality ingredients is something that has been at the core of Pizza Hut since the very first restaurant opened in Wichita 58 years ago. It’s so fundamental to our superior restaurant quality beliefs that we rarely feel the need to talk about it. That said, 58 years later, we are extremely proud to say that we still get our vegetables, our meats, our tomatoes, our flour, our cheese – everything that makes a great pizza – from top suppliers around the world. We are constantly working to lead the industry in this area and believe it is important to let customers know exactly where their food comes from and how it’s made.”

In addition to these ingredient simplifications, Pizza Hut has already eliminated partially hydrogenated oils (also known as artificial trans fats) and MSG. Currently, 15 percent of the restaurant’s pizzas have just one-third of the daily recommended dietary allowance for sodium, and 20 percent of its pizzas will meet that criteria by 2020.

The pizza restaurant does not use any fillers in any of its meat toppings. Its Italian sausage is all natural and sourced from U.S. farmers, and its meatballs are free of any artificial colors, flavors or preservatives. Pizza Hut also does not add any sugar or oil to its pizza marinara sauce, and its cheese is made from 100 percent whole milk mozzarella.

Pizza Hut announced earlier this year plans to redesign up to 700 restaurants each year, with a goal of operating 8,000 restaurants in the United States by 2022 – that’s a growth of 27 percent from the 6,400 restaurants Pizza Hut currently operates domestically. This redesign is intended to increase efficiency and convenience for team members and customers.