The legal challenge was widely expected and Vermont created a "food fight fund" in anticipation of the move because it was the first state to pass a GMO labeling law that did not require other states to go first. 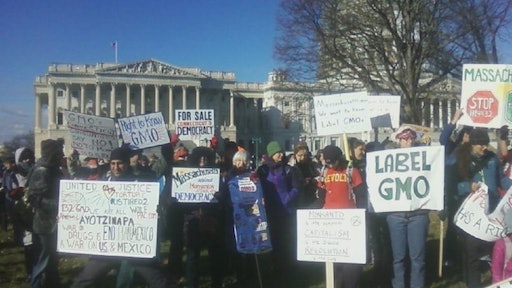 Several industry groups representing U.S. food makers on Thursday asked a federal judge in Vermont to block that state's new law that will require labels on food products made with genetically modified organisms (GMOs), according to Reuters.

The legal challenge was widely expected and Vermont created a "food fight fund" in anticipation of the move because it was the first state to pass a GMO labeling law that did not require other states to go first.

The fight over GMOs in the U.S. comes as more than 60 countries around the globe already require labeling of genetically engineered foods. GMOs have fallen out of favor with many U.S. consumers but products made with them are still abundant in the aisles of most U.S. supermarkets.

Connecticut and Maine last year passed GMO labeling legislation similar to that of Vermont, but it is on hold until several other states enact such legislation.

Among other things, they claim that Vermont's law is a "costly and misguided measure" that would impose burdensome new speech restrictions on food sellers and set the nation on a path toward a 50-state patchwork of GMO labeling policies that have "no basis in health, safety or science."

BIO, a trade group whose members include Monsanto Co., Dow AgroSciences, a unit of Dow Chemical Co, and other companies that sell seeds that produce GMO crops, have said that costs for an average household would rise as $400 per year due to mandatory labeling.