Autonomous Technology is Here. Now What?

Here's how the ongoing labor and driver shortage and advancements in driver safety measures impact growth in autonomous vehicles in the trucking space. 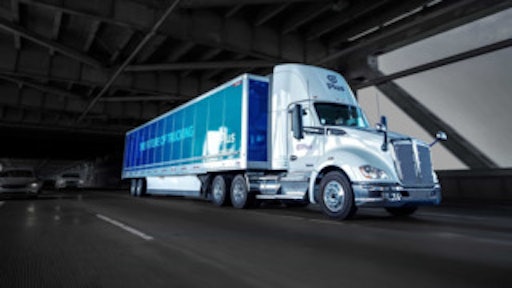 Driverless vehicles are becoming more of a reality, as consumer vehicles are now equipped with innovative features such as parking assist, adaptive cruise control and many other autonomous innovations. Autonomy in vehicles is categorized in six levels, but as of May 2021, no vehicles sold in the U.S. market have a Level 3, Level 4 or Level 5 automated driving system, according to J.D. Power. Right now, all vehicles require an alert driver sitting in the driver’s seat, ready to take control at any time.

However, as the level of autonomous technology grows, that could change, especially with the ongoing labor and driver shortage and advancements in driver safety measures. These two factors together make driverless technology a prime candidate for the supply chain industry.

“Currently there is a severe driver shortage in the industry, and it is expected that this driver shortage would only increase over the next few years,” says Raghavender Sahdev, CEO, Nuport Robotics. “The average age of a truck driver is approximately 45 and the next generation of youth do not have any interests in becoming truck drivers.

“As with introduction of any new technology, the nature of the job changes, a similar trend is expected in trucking as well,” Sahdev says. “In the future, the role for drivers would change and become more interesting, the driver would be responsible for other tasks such as remote monitoring of trucks, connection and disconnection of trailers from the tractor, handling emergency situations, performing safety checks, carrying routine checks, maintenance, repairs as needed on a frequent basis. Through the introduction of autonomous driving technology, the driver’s role would become more interesting and at the same time the driver shortage prevalent in the industry would be addressed to a great extent leading to more efficient supply chains.”

Today, autonomy in much of the trucking space is still in the development stage, as numerous carriers work together to create innovative ways of developing driverless technology.

For instance, Embark works with numerous partners across different sectors, including third-party logistics (3PL) providers, to do this very thing.

“Today, 3PL autonomy and vehicle autonomy broadly are in the testing and development phase,” says Sam Abidi, head of business development at Embark. “Embark specifically is working with shipping, carrier and 3PL partners to haul goods autonomously and refine our technology to be able to work seamlessly within the operating constraints of all transportation modes - carrier hauls, shipper private fleet hauls, 3PL provisioned hauls and more.”

While autonomous technology on the road is not yet ubiquitous, broad application could be expected as early as 2024.

Click here to hear more about the state of driverless trucks:

Florian Neuhaus, a partner in McKinsey, says that the adoption curves forecast pick up in the United States, Europe and China in 2024-2026. Additionally, the United States and China will flock to the technology the quickest due to cost of ownership forecasts, with Europe to follow suit.

While a completely driverless truck is not a reality yet, there are still a wide range of autonomous technology embedded into today’s modern trucks that help with the transportation process. Just like consumers see in their own vehicles, driverless tech assists drivers in numerous ways such as change-lane support, adaptive cruise control, route optimization and more.

“Due to automated systems, less time will be spent on decision making, such as route management, emergency response, etc.,” Sahdev says. “Some 3PL companies are using telematics and fleet optimization technologies to optimize their operations. Incorporating newer technologies, there are better response times to address any accident-related scenarios. Trucking OEMs in general ship ADAS features such as adaptive cruise control the use of which on highways can save fuel consumption, there are automated emergency braking based on input received from some sensors such as radar to avoid any accidents.”

Current use of autonomy in much of the supply chain space already helps create greater efficiency, which is exceptionally important in the cold chain as food and temperature-sensitive items can spoil if traveling for too long. For driverless trucks, downtime is much lower, which means they will reach their destination faster.

“The potential of food getting spoiled is much less due to timely deliveries and better controlled operations,” Sahdev continues. “Overall autonomy would lead to lesser food waste that generally happens in current operations. An overall tracking of the state of the food can also be maintained thereby prioritizing fast delivery depending on the status of the food.

“Recently TuSimple made a delivery with a safety driver of watermelons faster than traditional driving operations for a long-haul use case. Usually driving from East coast to West coast will take five days, however with AV technologies, this is reduced to three days. On the other hand, similar efficiencies are also observed for short haul use cases. Local agriculture and the food industry also require an optimized supply chain, where autonomous driving would help to improve safety, with lesser greenhouse gas emissions and overall quicker delivery time,” adds Sahdev.

Abidi supports the efficiency theory and believes that a truly autonomous trucking future could lead to the removal of hours-of-service constraints, an issue that plagues the industry due to long load times and traffic. He also explains that this will support more predictable delivery times and increase the number of hours that warehouses could expect to receive as well as ship goods.

“Additionally, autonomous trucks will not need to be routed home after a few runs like a manual truck that must get its driver home,” he adds. “This enables more flexibility in routing, which could lead to a reduction in deadhead miles and an increase in utilization.

“On the sustainability front, we expect autonomous trucks to reduce fuel consumption due to lower travel speeds (no hours-of-service constraint pushing the vehicle to get somewhere quickly), smoother throttle response and reduced need to idle (no need to stop for the night). These factors will allow 3PL providers and shipping customers to better achieve sustainability targets,” he says.

While some may be concerned that robotics and autonomous technology takes jobs from hardworking people, the driver shortage is still reality, and it is likely that no truck will ever run completely without a driver.

Shawn Kerrigan, COO and co-founder of Plus, believes that advances in autonomous trucking will only help attract new drivers rather than replace them.

“Driver shortage and high turnover rate are two of the most pressing problems facing the trucking industry,” Kerrigan says. “The average annual turnover rate for long-haul truckers at big trucking companies has been greater than 90% for decades, according to an article from NPR. Our autonomous driving system transforms the role of truck drivers from being an operator to a ‘pilot,’ potentially elevating the job into something that is much more attractive to boost recruitment and retention. This could potentially bring in younger drivers and female drivers into trucking careers as well.”

Click here to hear more about automation and humans working together in the supply chain:

In the cold chain

Driverless technology will support cold transportation, and some even say will factor temperature monitoring into the technology systems.

Sahdev says that are a few differences when it comes to the cold chain and dry storage for autonomous trucks. For instance, power consumption is a factor with reefer trucks because a higher power consumption is needed for refrigeration. This means the onboard computer and sensor systems need efficient power management. He also explains that efficiency is top of mind for the cold chain due to the perishable nature of the goods being transported.

As the cold chain approaches an autonomous future and new and exciting things happen in trucking, the industry as a whole works to be more enticing to younger drivers. In response, companies will likely look to autonomous technology to optimize performance and operations.

{The original version of this article published in Food Logistics' July 2021 issue}.

The Good, the Bad, the Last Mile

Incumbents will take the stage to share real-use cases and how they factor in ROI, impact on the workforce and key metrics that enable seamless integration of certain technologies.
Manifest, LLC
July 15, 2022