Guiness Rolls Out The Barrels

Technology helps this Irish brewer manage the movement of beer across the Atlantic. 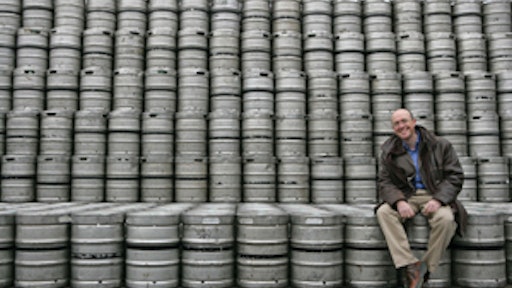 Andy Cullen and his planning and export team at Guinness thought the iconic Irish beer brewer's customer service numbers looked pretty good: 99-100 percent month after month, according to their figures. But when Cullen and his team sat down with their U.S. customer back in 2003, they learned that the customer was looking at an entirely different set of metrics, and by those numbers Guinness was barely breaking 50 percent service levels.

It wasn't just that the two parties were looking at different numbers, Cullen says now. "The problem was that the way I thought the supply chain was working was actually not the way that it was working." In fact, supply disruptions causing the breakdown in service were going undetected at Guinness. In response, Cullen not only realigned the key metric that his team tracked but also went looking for a technology solution that would allow Guinness to become proactive in how it diagnoses and addresses the hiccups in its supply chain.

The beer brewer is a division of Diageo, the $19.2 billion global company that was formed in 1997 with the merger of Guinness and GrandMet. Diageo is headquartered in London, but Guinness continues operations in the heart of Dublin at its landmark St. James's Gate Brewery, acquired under a famously far-sighted 9,000-year lease secured by company founder Arthur Guinness in 1759.

With approximately 10 million pints of Guinness consumed on the planet each day, job one for the company's supply chain function is to ensure availability of the beer for its many devotees around the globe. So after learning that Guinness' U.S. customer—actually a sister division, Diageo North America—was rating their service levels at around 50 percent, far below Guinness' own estimate of virtually 100 percent, Cullen and his team returned to Dublin determined to increase their service levels.

The proximate cause of the disparity between Guinness' figures and those of its customer was quickly evident, says Cullen. "We had a very simplistic view of the supply chain, which was that if it left our facility on time, then surely it turned up in the States on time. But the supply chain between here and the States is reasonably complicated, and it turns out that there's a fair amount of things that can go wrong."

As Cullen learned, the complexity introduced by the multiple steps in the beer's journey to the U.S. market—with numerous handoffs between different responsible parties —was compounded by the inherently unpredictable nature of ocean transport: Certain shipping lines performed better than others, the price of oil affected how fast the vessels moved across the Atlantic, weather could help or hinder vessel movement, and even the time of year caused variability in crossing times.

Switching from Guinness' "on time in full on dispatch" metric to "on time in full on arrival" ("OTIF on arrival") to match the customers' figures was an easy fix, but the greater challenge for the planning and export team was identifying a solution that would let the brewer accurately track the new metric as well as manage its inventory all the way across the Atlantic. Diageo uses SAP globally for ERP and Guinness also uses Manugistics (acquired this year by Scottsdale, AZ-based JDA Software Group) for supply and demand planning. But Cullen says that he was looking for "something a little bit different, a little bit leading-edge" to help the company solve this particular problem.

In casting his eye around at the various software packages available, Cullen came across a company called SeeWhy, a Windsor, U.K.-based provider of what it calls a "real-time business intelligence platform."

SeeWhy CEO Charles Nicholls previously had worked at Business Objects, but he says that he founded SeeWhy with a vision for a new approach to business intelligence.

"The traditional way of extracting data out of operational systems, transforming it and loading it into databases, and then, once it's in the database, querying, analyzing and reporting, all that was problematic once you moved to become process-oriented and real-time," Nicholls says.

Instead, SeeWhy takes an "event stream processing" approach to BI, meaning that a customer can feed transactional data into the solution on a continuous basis, and the software analyzes the data in real time, streams the results back to the customer and provides alerts when it detects anomalous events. In a sense, the software aims to take the place of the analyst who would be querying the BI database, providing reports and firing off an e-mail to the boss when something amiss turned up in the data.

SeeWhy's "always-on" capability attracted Cullen, who was looking to adopt a more predictive and proactive approach to how his team managed the movement of the company's beer. After initial meetings with SeeWhy during which the solution provider worked with Guinness to map out the complexity of the trans-Atlantic supply chain, the brewer elected to move ahead with an implementation of the SeeWhy platform, with the solution provider hosting the software for Diageo.

SeeWhy worked with Diageo to configure the solution so that it would record each event along the supply chain for each shipment, and then continuously calculate for each shipment whether it would reach its destination on time. Many of the data feeds are automated, although Diageo staff do get shipment updates from carriers' Web sites and key that information into SAP. At present, Diageo sends data from its ERP system to SeeWhy at the close of every business day, and Cullen then reviews the reports coming back from the system each day to get updates on shipments en route or to check for alerts on late shipments.

Looking Into The Data

In the event that something amiss pops up on the SeeWhy dashboard, Cullen can drill down into the details on a particular shipment to learn where a shipment is getting delayed and how that will impact Guinness' ability to meet its delivery obligations. The system also provides a standard daily report with month-to-date performance and a predictor for what the month-end performance is likely to be, given the current state of shipments. Cullen and his team can use all this information to take action to get individual shipments or overall service levels back on track.

As might be expected, they were able to start improving Guinness' OTIF on arrival performance within months of adopting the solution. The metric currently hovers around 80 percent. "We could push it up further," Cullen says, "but if we did that we'd have an increased number of shipments arriving early."

Cullen and his team also developed new insights into the different factors that influence transit times and on-time delivery by looking beyond the "headline" information presented in the SeeWhy reports and drilling down to uncover root causes of delays or disruptions.

For example, using the solution, Cullen learned that the October-December time period sees both an increase in seasonal traffic headed westbound as well as less-favorable weather, so Guinness is now able to take those factors into account in planning its shipping lead times, with the result that the product still arrives on time.

In addition, the planning team has gained a better understanding of carrier performance based on the new arrival time metric.

"Interestingly," Cullen says, "we learned that one of our most competitively priced shippers is producing very good customer service for us. That obviously has led down a particular track when we are seeking increased shipping capacity to meet a peak shipping requirement. Not only can we secure the capacity, but we can get it at the right price. In the past, to be honest, we would have probably gone for our most expensive carrier in the belief that they offered the best customer service because we simply didn't have the visibility to know any better."

The ability to use the predictive reports on expected month-end performance to proactively address any issues flaring up on the horizon has produced a critical change in how Guinness operates, Cullen says. "The way that we used to measure, the metric would come out maybe two weeks after the month-end and was retrospective. Now I've got a pretty good predictor two weeks into the month of where the month-end's going to be, so I've probably got an additional month of lead time available to me to take action to solve any issues. That's a lot of time in the supply chain these days."

My Goodness, My Supply Chain

Guinness beer destined for the corner pub on Main Street U.S.A. leaves the Dublin brewery in kegs that are subsequently loaded into 40-foot containers, which are loaded onto trucks that drive to Dublin Port, where the containers are offloaded into a customs bay before being moved into a holding pen.

From there, the containers are loaded onto a feeder ship that sails from the more shallow Dublin Port to a deep-sea ocean port (Amsterdam or Southampton, for example, or even Liverpool) and offloads the beer into a holding area until the arrival of the ocean vessel. The ocean vessel takes the containerized beer across the Atlantic to, first, New York, followed by port calls in Norfolk, Charleston, Houston and, finally, Los Angeles.

In port, the containers are offloaded, taken through customs, then picked up and delivered to a Diageo warehouse. Transit times, gate-to-gate, range from about 21 days to New York, up to 33-36 days for Los Angeles, depending on which of several different carriers is transporting the beer, weather, time of year and other factors — when everything goes right. —A.R.