Raising Your Voice-As Well As Productivity

Price of solutions comes down as popularity grows. 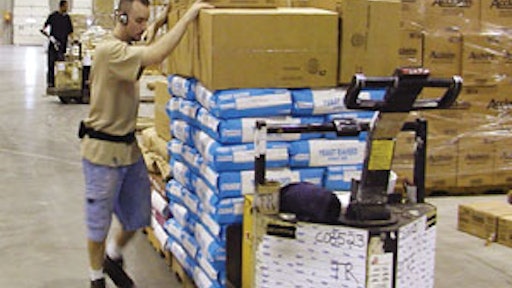 Voice technology is heating up.

According to Mark Dessommes, channel manager for LXE Inc., Norcross, GA., voice-enabled hardware is expected to grow 33 percent every year, over the next five years. The primary motivating factor for this growth is that it's becoming cheaper to use voice technology in the warehouse.

"This is not just for the big companies that can invest millions of dollars," says Marceline Absil, vice president, marketing and sales, Top-VOX Corp., Geneva, IL. "Even those companies that only have five or 10 operators can now afford voice and use it to see an increase in productivity."

According to Absil it has become an investment that will allow smaller companies to see a return on their investment in as little as six to seven months.

Why have the prices come down? According to Scott Yetter, CEO and president of Voxware Inc., Lawrenceville, NJ, there are a number of trends that are making it possible for companies of any size to adopt voice.

"There's an open hardware approach now. It used to be you had to buy a special device to do voice. Now it's being supported by the major hardware manufacturers such as Motorola and LXE," he explains. "Now that customers have a choice of what type of hardware they can buy, the cost has come down."

In addition, the software that is running voice applications has changed dramatically. Yetter says that the market has matured to the point where vendors are offering packaged software solutions-off-the-shelf products are always less expensive.

"Before, everyone thought that everything had to be done as a highly-customized solution-you had people writing their own payroll systems, their own general ledger systems, their own manufacturing systems and the same thing was true with voice," Yetter explains. "However, over time, all those things became pieces of packaged software that you could buy off the shelf. I don't think the voice market is any different."

"We will go in and ask them to explain their workflow and then to define their requirements. Then we configure the product and deliver it to them," Yetter explains. "We've had customers go live in as little as three weeks. In the old days, it used to take us three-to six-months to deliver a voice solution. When you're writing code over-and-over and then testing it, it takes time."

The problem with formulating a custom business solution is that it is a snapshot of a company's business on the day that the solution is created. Once a business process alters, changes have to be made in the software.

"I don't know of anyone whose business doesn't change. If it doesn't, they'd probably go out of business," Yetter adds.

These off-the-shelf voice solutions are dynamic enough that they can be reconfigured by end-users themselves. No knowledge of code is required. In fact, the proper person to reconfigure these systems is a business analyst who understands workflow processes within the company.

Solutions providers are also offering products with flexible IT architecture.

"Up until recently, voice providers had a limited choice of how their enterprise application was run," notes Larry Sweeny, the founder of Vocollect Inc., Pittsburgh. "If the program was only compatible with Microsoft SQL servers and a company embraced Unix and Oracle, it became a cost burden."

IT departments need a choice of operating systems and databases so that they will be able to adapt whatever they buy to their IT infrastructure and thereby maximizing the return on their investment. This is why Vocollect is constructing the underpinnings of its solutions so that they run on and adapt to any operating system or database. This makes the solutions easier to manage and provides a lower cost of ownership.

Multimodal: The Next Generation

One of the biggest trends over the past number of years has been the emergence of personal digital assistants (PDAs), handheld computer devices that are small enough for workers to carry with them. However, the new generation of PDAs are very different from previous ones.

"We're acute believers in voice," says LXE's Dessommes. "We think it's going to be a big chunk of the growth that we're expected to deliver over the next five years, so we have voice-enabled all of our PDA terminals."

"Thanks to the convergence of technology, we now have mobile devices that people are using in the warehouse that incorporate a number of different technologies that prior to now were separate devices," explains Bill Hubacek, director of distribution technologies, FKI Logistex, North America, St. Louis.

"Now, instead of just having a dedicated voice box, which only allows you to work with voice, PDAs are incorporating bar code scanners, RF picking units, keypads, display screens and also voice capabilities."

"It makes a lot of sense from a cost perspective, now that you don't have to buy two devices-a handheld device and a voice device-to get the job done," says Vocollect's Sweeney. "Not only does it save money, but it offers flexibility and choice for the customer."

The fact that these multimodal concepts are beginning to emerge means that there are now numerous technological and logistical challenges in the warehouse that can be answered with just one device and having instant access to multiple technologies means that warehouse workers can work smarter, which means higher productivity.

"We'll have voice and scanning done from the same unit. The picker will go to a location and he's going to get his pick commands-the check digit, the item, the quantity-via voice. However, some of the selections actually require lot and serial numbers from the picker and you don't want any of that done by voice."

Dealing with bar codes is problematic says Mackenzie, especially if workers have to speak lines of numbers that may run up to 26 digits long. This would squelch productivity. However, if the PDA they're using has a scanner unit embedded within it or a ring scanner attached to it, a worker need merely scan the unwieldy bar code when prompted by the voice system. The system would recognize the numbers and import them.

Another example would involve a worker looking at his pick list on the PDA's screen, while he is picking on the warehouse floor and deciding that going into a certain area to select might not be the smartest use of his time.

He can access the screen with a stylus and move the particular items lower on his pick list. The system records the change and the worker has created his own picking path, based on his own experience and knowledge.

Today's new devices are also integrating RFID along with voice and traditional data collection into one unit.

Up until that time, Dunkin' Donuts was using paper-based systems to keep track of everything from inventory to expiration dates.

"We had a basic AS400 that took orders and printed tickets. Inventory was all adjusted off of invoicing sometimes two-to-three days later. We never had an accurate view of inventory at any one time. It was all very manual. Voxware was our very first experience with new technology."

The company took the unusual step of implementing voice in its DC first, via one of Voxware Inc.'s voice solutions. After that proved a success, Dunkin' decided to take on the larger issue of warehouse management systems, electing to go with Retalix USA Inc. as its WMS vendor.

"Most of the ROI on the WMS comes from pick savings which were handed to us by Voxware. We paid for the system in nine months and the savings were directed toward the purchase of the WMS." Engard explains. "So we started saving even before we bought the WMS."

Now that Dunkin' Donuts has a fully-integrated warehousing solution, the savings have really started to roll in. Before voice and WMS, the company had eight full-time associates manually checking every single pallet of product that went out of its warehouse before it got loaded on the truck.

"With voice recognition and WMS we don't need to do that and we don't check any pallets going out," Engard notes. "Just through the relocation of those checkers, we've paid for the whole system in 12 months."

In addition, Dunkin' Donuts has seen gains in inventory accuracy-99.9 percent consistently, with no checking required.

With savings like those, it's time for a well-deserved coffee break. -B.S.

While there’s no one-size-fits-all approach to data-based strategies, today’s rising costs make it critical for the food and beverage industry to utilize all of the information available to them, particularly data.
Narrative
December 10, 2022

Your organization depends on the health and happiness of the workforce. When your workers are hurting, your company also feels the pain. Ultimately, if you have your team’s back, they are more likely to have yours.
HeroWear
December 9, 2022

In an era of rapid change, organizations must prepare for adoption of innovative technologies with a thoughtful approach that is designed to succeed within the constraints of their unique environments.
Symphony RetailAI CPG
December 1, 2022

The AI-powered territory planning seamlessly connects to DispatchTrack’s hybrid routing capabilities to ensure that territory plans can be translated into daily routes.
DispatchTrack
September 21, 2022
Follow Us