Cheerios and Honey Nut Cheerios produced at the company’s Lodi, Calif., facility are being recalled because an isolated incident resulted in wheat flour being inadvertently introduced into the gluten free oat flour system at its Lodi facility. 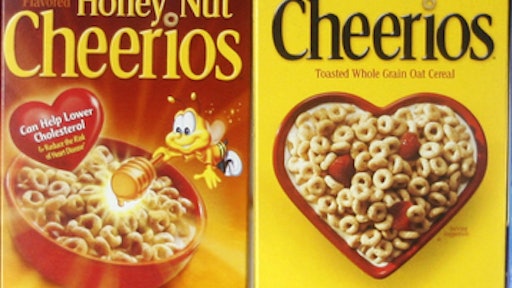 General Mills Inc., is voluntarily recalling several days of production of Cheerios and Honey Nut Cheerios cereal produced at its Lodi, Calif. facility on certain dates in July of this year because of an undeclared allergen – wheat – with potential adverse health effects. Because this recall relates to an undeclared allergen, this is a Class I product recall.

Cheerios and Honey Nut Cheerios produced on these dates at the company’s Lodi, Calif. facility are being recalled because an isolated incident resulted in wheat flour being inadvertently introduced into the gluten free oat flour system at its Lodi facility. As a result, the products may contain an undeclared allergen – wheat – in products labeled as gluten-free.

General Mills will recall and retrieve affected cereals produced on those dates from customer warehouses and store shelves. Consumers with wheat allergies, celiac disease or gluten intolerance should not consume products bearing the affected code dates and should contact General Mills for a replacement or full refund.

This voluntary recall includes four days production of original (yellow box) Cheerios, and thirteen days of production of Honey Nut Cheerios at its Lodi, California facility with the following “BETTER IF USED BY” code dates and the plant code LD which indicates the product was produced at Lodi, California: