Most of the affected people reported eating sushi made with raw tuna in the week before becoming sick.

The Centers for Disease Control (CDC) 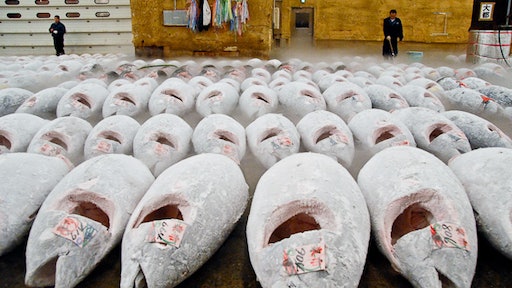 The Centers for Disease Control has reported that 60 people have gotten Salmonella in 11 states and laboratory results indicate frozen raw tuna is the likely source of the infections.

The Centers for Disease Control has reported that 60 people have gotten Salmonella in 11 states and laboratory results indicate frozen raw tuna is the likely source of the infections. Most affected people reported eating sushi made with raw tuna in the week before becoming sick.

Illness onset dates range from March 5, 2015 to June 30, 2015. Ill people range in age from younger than one year to 83 with a median age of 32, and 56 percent are male. Among 57 people with available information, 11 (19 percent) have been hospitalized, and no deaths have been reported.

Illnesses that occurred after June 13, 2015 might not yet be reported due to the time between when a person becomes ill and when the illness is reported. This takes an average of 2 to 4 weeks.

Epidemiologic and laboratory findings indicate that frozen raw tuna is the likely source of the infections. In interviews, ill people answered questions about foods eaten and other exposures in the week before they became ill. Of 46 ill people for whom information is known, 43 (93 percent) reported consuming sushi in the week before they became ill. This proportion is significantly higher when compared with results from a survey of healthy people in which 5 percent reported eating "sushi, sashimi, or ceviche made with raw fish or shellfish" in the 7 days before they were interviewed. Of the 42 people with information about their sushi exposure, 41 (98 percent) reported eating a sushi item containing raw tuna, and 25 (86 percent) of 29 with information reported eating a sushi item containing raw “spicy tuna.” The traceback investigation is ongoing, but preliminary investigation identified that frozen raw tuna was used to make the raw tuna sushi reported by ill persons.

The Minnesota Department of Health and Department of Agriculture isolated the outbreak strain from samples of unopened frozen raw tuna products collected from a Minnesota grocery store where an ill person in this outbreak reported eating tuna sushi. The contaminated frozen raw tuna products collected from the store represented one lot of product imported from Indonesia by Osamu Corporation.

The National Antimicrobial Resistance Monitoring System (NARMS) is a U.S. public health surveillance system that tracks antibiotic resistance in foodborne and other enteric bacteria found in people, raw meat and poultry, and food-producing animals. NARMS is a partnership among the CDC, the U.S. Food and Drug Administration (FDA), the U.S. Department of Agriculture (USDA), and state and local health departments.

The NARMS human surveillance program at CDC monitors antibiotic resistance in Salmonella and other bacteria isolated from clinical specimens submitted to NARMS by public health laboratories. CDC's NARMS laboratory conducted antibiotic resistance testing on clinical isolates collected from three ill people infected with the outbreak strain. Of the three isolates, one (33 percent) isolate was resistant to ampicillin and two (67 percent) were susceptible to all antibiotics tested on the NARMS panel.

CDC and state and local public health partners are continuing laboratory surveillance through PulseNet to identify additional ill people and to interview them about foods they ate before they became ill. CDC will provide updates when more information is available.