More than 170,000 people have had to leave their homes, and an estimated 116,000 households have lost their crops and livestock. 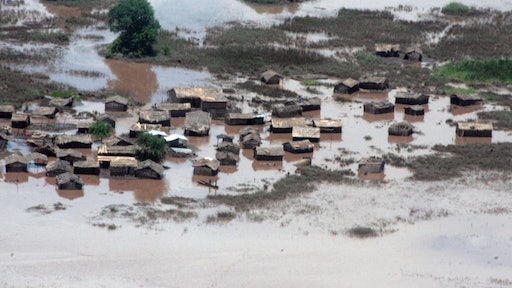 Farmers in southern Malawi urgently need seeds and livestock after intense flooding destroyed their fields and homes, washing away animals and crops and threatening local food security, according to the Food and Agriculture Organization (FAO) of the United Nations.

More than 170,000 people have had to leave their homes. Some 79 deaths have been confirmed so far, while 153 people are still missing in Nsanje district alone. An estimated 116,000 households have lost their crops and livestock.

Malawi is regularly affected by droughts and floods. But the current heavy rains have come ahead of their usual schedule – repeatedly bursting the banks along the Shire and Ruo rivers – and their impact has been far wider.

Warnings of flash floods remain active as moderate to heavy rains are expected in the country's northern regions. It is estimated that more than 63,000 hectares of land is under water, including 35,000 hectares of crop land, and a state of emergency has been declared for 15 of Malawi's 28 districts. The most affected districts are Chikwawa, Nsanje and Phalombe.

Untold numbers of goats and chickens have perished where waters rose with unexpected speed, raising the risk of livestock disease outbreaks.

The government's response plan includes a $16 million budget for agricultural needs to put affected farmers back on track to plant and harvest food during this agricultural season. For some fields, crops could be ready as early as June, thus mitigating the need to rely on long-term humanitarian programs.

FAO aims to work closely with the Malawi government to supply them with short-cycle varieties of maize, rice, sweet potato, cowpeas, vegetable seeds and cassava cuttings for replanting as soon as feasible. At the same time, local families need new livestock to ensure animal protein intake, and irrigation facilities should be restored before the dry season to ensure food production.

"Flood-hit families risk harvesting nothing or very little this year, leaving them food insecure at the very outset of the agricultural season and undermining much of the progress being made in reducing food insecurity in Malawi," she said.

Some 86 percent of Malawi's population live in rural areas and engage in farming and rearing livestock. Average yields on crops in the country have for decades been half that recorded for southern Africa as a whole.

The nation enjoyed a bumper maize harvest in 2014 and overall cereal production rose by 8 percent, leading to lower core food prices and cutting by more than half the number of people assessed as food insecure. However, last year's crop had been weak in the districts most affected by the current flooding, prompting local food-security alerts and causing Malawi to be added in October 2014 to the list of countries requiring external assistance for food.

Malawi's districts are regularly hit by floods and droughts, requiring emergency responses of varying size each year. The frequency and magnitude of the recurrent disasters are worsened by deforestation, population pressure and widespread poverty.

Long-term watershed management infrastructures are urgently needed so that even intense flooding is less damaging than this year.

FAO has been working closely with the government and other partners in Malawi to build more resilient livelihoods and reduce exposure to risks such as floods and dry spells.

Last year FAO, together with UNDP, UNICEF and WFP, started piloting an integrated approach to resilience integrating nutrition education, climate smart agricultural practices, saving and loans and disaster risk reduction in the district of Phalombe which has been severely hit by the current floods. This project is supporting the government of Malawi's national social protection support strategy program.

Coke, PepsiCo Both On Board With FAO's Land Tenure Guidelines