EU's commissioner-designate Vytenis Andriukaitis was speaking during his confirmation hearing at the European Parliament while the seventh round of negotiations for a Transatlantic Trade & Investment Partnership (TTIP) were unfolding in the US. 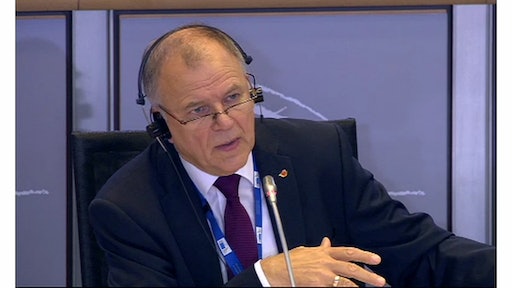 Vytenis Andriukaitis replies during a question and answer session at the European Parliament committee on Environment, Public Health and Food Safety hearings.

The European Union's commissioner-designate for health and food safety, Vytenis Andriukaitis, has promised members of the European Parliament he will oppose any attempt to lower the bloc's food safety standards as a consequence of agreeing a free trade deal with the U.S., according to www.just-food.com.

"As a doctor, my answer is no to any lowering of the EU safety standards, no to lowering of food safety or health standards," Andriukaitis, a physician and former health minister, said, noting European Commission president-elect Jean-Claude Juncker had also promised to resist such regulatory change. "I cannot make any compromise on this issue, whether it's hormones in meat or chlorine baths for chicken," he added.

Andriukaitis was speaking during his confirmation hearing at the European Parliament while the seventh round of negotiations for a Transatlantic Trade & Investment Partnership (TTIP) were unfolding in the US.

Meanwhile, Andriukaitis added he saw a need for a scheduled 2015 review of EU procedures used to assess health claims associated with foods.

TTIP Could Bring Food Safety Regulations To A Standstill: Report