When Northeast Ohio grocer Heinen’s went looking for lighting that could last, it found an ally in GE — and an answer in LED. 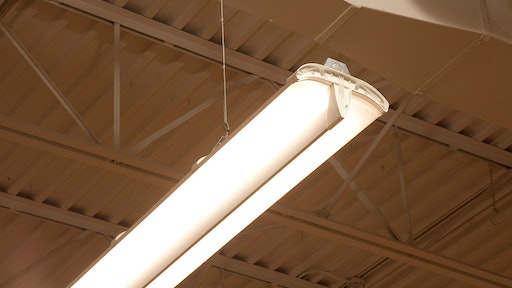 Staying on the cutting edge of technology is one way Heinen’s Grocery Store creates an experience that keeps shoppers coming back, and lighting is essential to this equation — minus the time and cost of replacing lamps. When the Northeast Ohio grocer went looking for lighting that could last, it found an ally in GE — and an answer in LED — that together keep the ladders and lifts tucked away.

“We were always relamping,” said Bill Wells, director of store planning, regarding some Heinen’s Grocery Store locations. “In the aisles we used a pendant-mounted HID fixture that was fine for many years. The thing was, half the lamps died before their rated life, while others lived well beyond it. We don’t fight that anymore.

Heinen’s Grocery Store first developed plans to refashion many of its 19 neighborhood locations nearly five years ago. As efforts progressed, so did the grocer’s interest in the latest energy-efficient innovations for commercial buildings, particularly LED lighting.

“When LED came on the scene, it allowed us to deal with the issues of specialty lighting,” Wells said. “It gave us the color we wanted, and our replacement lamp orders went way down. It’s a hassle to drag a lift on the floor and wheel it around just to change lights. We were burning too many resources on burnt bulbs.”

“Our ceilings are pretty high, around 16 to 18 feet. With HID you have to generate a lot of light at the source to get it to the floor. And there’s glare — almost a haze,” said Wells. “We brought the new T5 fixtures down several feet, which helped to hit the bottom shelves, and it gave us a good, even light on all the product surfaces. Overall it was much better than HID.

At last, at Heinen’s Grocery Store in Twinsburg, Wells’ patience was rewarded with an LED fixture that promised to leave replacement lamps in the past. Leff Electric, a long-trusted electrical supply distributor, presented him with GE’s new Lumination™ IS Series LED Luminaire, a product of GE ecomagination.

“GE jumped ahead with this suspended linear fixture—my first reaction was ‘wow!’” Wells said. “It’s cool and cutting edge. In fact, we were about to go with another option until Leff said to us, ‘Hold on, GE has something we really think will work for you.’”

“The price was right, the product fit our needs, and we knew GE would stand behind its commitment, so we decided to go with the Lumination LED fixture,” said Wells. “GE also presented different lighting designs and helped determine the final layout. And still, you just don’t know what you’re getting into until you install it, so having Leff there to see that everything went smoothly was a benefit.

Wells notes that while he has designed buildings and worked with lighting professionals for 30 years, some things, like great service, never change.

“Someone to do the lighting design, and who can give me accurate light levels, then turn around and sell me those products and stand behind them—that’s what I want.”

Moving ahead, Heinen’s Grocery Store will evaluate additional LED lighting options from GE including Albeo™ high bay fixtures to add “punch” in its produce departments. Already, GE’s Evolve™ LED Area Lights have been installed in one store parking lot and soon will be added to a warehouse location as well.

As for Wells, he believes Heinen’s Grocery Store has found its answer.

“If I can cut my electric cost and my maintenance cost, who wouldn’t do that? It just makes good business sense. If it’s not an LED solution, we’re not interested.”

LED is LEaDing the Way