The most common 15-ounce American can is around 17 cents to make and will rise 3 cents once the tariffs take place. 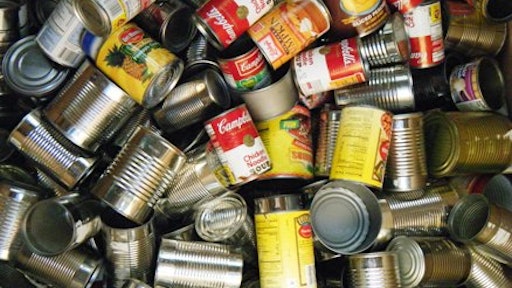 Reuters reports that the president of Pacific Coast Producers (PCP) David Vincent is planning to use 700 million tin-coated steel cans for this year's tomatoes, peaches and pears from 168 growers in California. He then sells the fruits and vegetables to grocers, food service companies and restaurant chains.

However, since Donald Trump announced the 25 percent tariff on steel and aluminum, PCP has seen steel costs jump 9 percent in market prices before the tariffs even take effect.

Like many producers, Vincent is expecting to see his steel bill rise for the year by $2 million, forcing him to choose between taking a potential 75 percent cut to his company's profits or pushing the added costs to his retail customers and, eventually, consumers.

The Trump administration first slapped the tariffs on steel and aluminum as a means to protect U.S. jobs and even out trade imbalances, however, it is having a ripple effect throughout the U.S. economy. Industries varying from cars, oilfield, to agriculture are all having debates over the pros and cons of the policy.

The canning industry is expecting to take a hard hit from the tariffs. The most common 15-ounce American can is around 17 cents to make and will rise 3 cents once the tariffs take place, Reuters reports.

According to Reuters, if all cans went up by 3 cents, it would generate an additional $720 million in costs for the supply chain.

Consumers could potentially see a rise in prices for groceries, putting the poorest Americans at risk. According to U.S. government statistics, poorer Americans spend more of their budget on food than those in higher income brackets. The canning industry has made economic fairness as one of its arguments for canceling the tariffs. According to Can Manufacturers Institute, Americans on food stamps consumed 7.1 cans of fruit and vegetables every week.

PCP's producers are worried that the company won't be able to provide the cans they need to ship their products out, saying that they can't be in business unless PCP is doing well.