Improved infrastructure coupled with new supply chain capabilities should result in record cargo volume at the Port of Oakland. 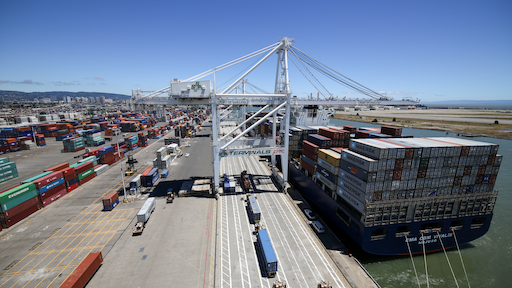 Improved infrastructure coupled with new supply chain capabilities should result in record cargo volume at the Port of Oakland. It could also make Oakland a first port of call for container ships visiting the United States from Asia. That’s the message a senior port official gave supply chain executives in an annual operating performance review earlier this month.

“I’m forecasting growth because of the development that’s going on here,” Driscoll told a gathering of 50 trade and transportation leaders. “It won’t be dramatic—it will be steady—but it will result in more cargo volume than we’ve ever had before.”

The maritime director said that three international shipping lines are contemplating Oakland first calls due to recent port improvements. That’s important since the first port of call is where ships discharge most U.S. imports. Oakland import volume could increase if any of the shipping lines makes the move.

“The ocean carriers are looking favorably at Oakland,” said Driscoll. “It’s a major discussion between them and their import customers.”

The maritime director noted the following projects are drawing the most interest from shipping lines:

The Port of Oakland reported total volume of 2.37 million 20-foot containers in 2016. Earlier this year the port projected that volume will reach 2.6 million containers by 2022. That would be 8 percent more than the port has ever handled in a single year.

The rise in demand for cargo transportation through ships and an increase in trade-related agreements have boosted the growth of the global shipping containers market.
Allied Market Research
May 13, 2020

The report shows how weekly allocated TEU capacity from North America to China declined between 2018 and 2019 in the wake of growth during previous years.
BlueWater
March 6, 2020
Follow Us