The four international marine container terminals at the Port of Oakland announced they are developing a program to operate their terminal gates on Saturdays to reduce weekday congestion at the port. 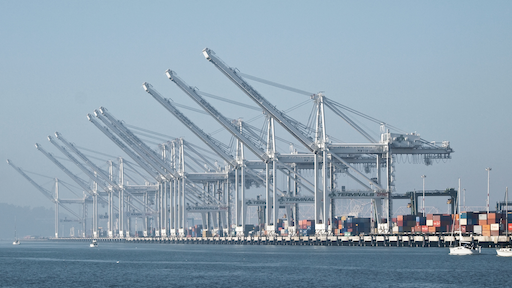 The four international marine container terminals at the Port of Oakland announced they are developing a program to operate their terminal gates on Saturdays to reduce weekday congestion at the port. The new program, called OakPass, is expected to begin in the fourth quarter of this year, pending review by the Federal Maritime Commission and other conditions.

The terminals, through the Oakland MTO Agreement (OAKMTOA), have submitted a filing to the FMC describing the proposed program. The terminals are currently working to ensure that an adequate supply of labor will be available to operate the new gates. OAKMTOA has established OakPass LLC, a not-for-profit company, to manage the Saturday gate program.

“The Port of Oakland and the four international container terminals agree on the need for additional capacity to reduce congestion and accommodate future volume growth,” said John Cushing, president of OakPass LLC. “After spending well over a year evaluating options including night gates, we determined that adding a Saturday gate is the most practical and cost-effective method to increase capacity in a way that meshes with availability of truck drivers and longshore workers and serves the entire supply chain.”

To help pay for the cost of the new gates, the terminals will begin collecting an Extended Gate Fee (EGF) of $17 per 20-foot equivalent unit, or $34 on a typical 40-foot container. The EGF will be assessed on loaded import and export containers entering or exiting the terminals during Peak hours, defined as Monday through Friday, 7 a.m. through 6 p.m.

No EGF will be assessed during OffPeak hours (Saturdays 7 a.m. through 6 p.m.). Empty containers and transshipment cargo will be exempt from the EGF, according to the filing submitted to the FMC. The EGF will be charged to the beneficial cargo owner, not to trucking companies or drivers.

OakPass is currently setting up the information systems and financial arrangements needed to collect, track and distribute EGF payments. By the time OakPass begins operating Saturday gates, all cargo owners moving containers through the Port of Oakland will need to be registered with OakPass to pay the EGF on containers delivered or picked up during Peak hours. OakPass will provide registration instructions within the next several weeks at OakPass.com.

Editors Insight: The proposed fee has drawn criticism from large retailers, farmers and other companies that rely on the port for imports and exports and could end up paying millions of dollars to move cargo. Port officials say the fee is necessary to reduce traffic during the busiest periods and to pay for new Saturday service at container terminals.

The port has struggled to find labor to manage its increasing volume. The agriculture export market continues to expand. Hence the terminals need to invest in upgrades and labor.

There is no quick-fix to this issue.

Shippers can’t be blamed for not wanting to pay higher cargo handling costs. But investments are needed to make the port attractive to carrier lines.

The shippers and the port are not the only parties affected by the current challenges. The Greater Oakland community – including government, industry and civic organizations – should be involved in addressing how the port can become more competitive. 8-21-15 By Elliot Maras