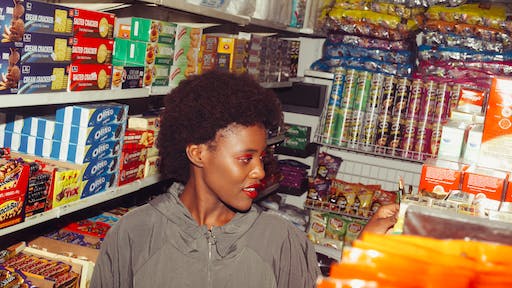 Household consumer packaged goods (CPG) spending overall was up 17% in June compared to June 2019, following an increase of 21% in May 2020 over the previous year. The findings are part of new data released by NCSolutions (NCS), the leading company for improving advertising effectiveness for the consumer packaged goods ecosystem.

In addition, an analysis of the Home-Confined Buying period (March 22-June 30) shows the highest performing CPG categories during this phase of the pandemic, were frozen meat, alcohol and frozen foods. 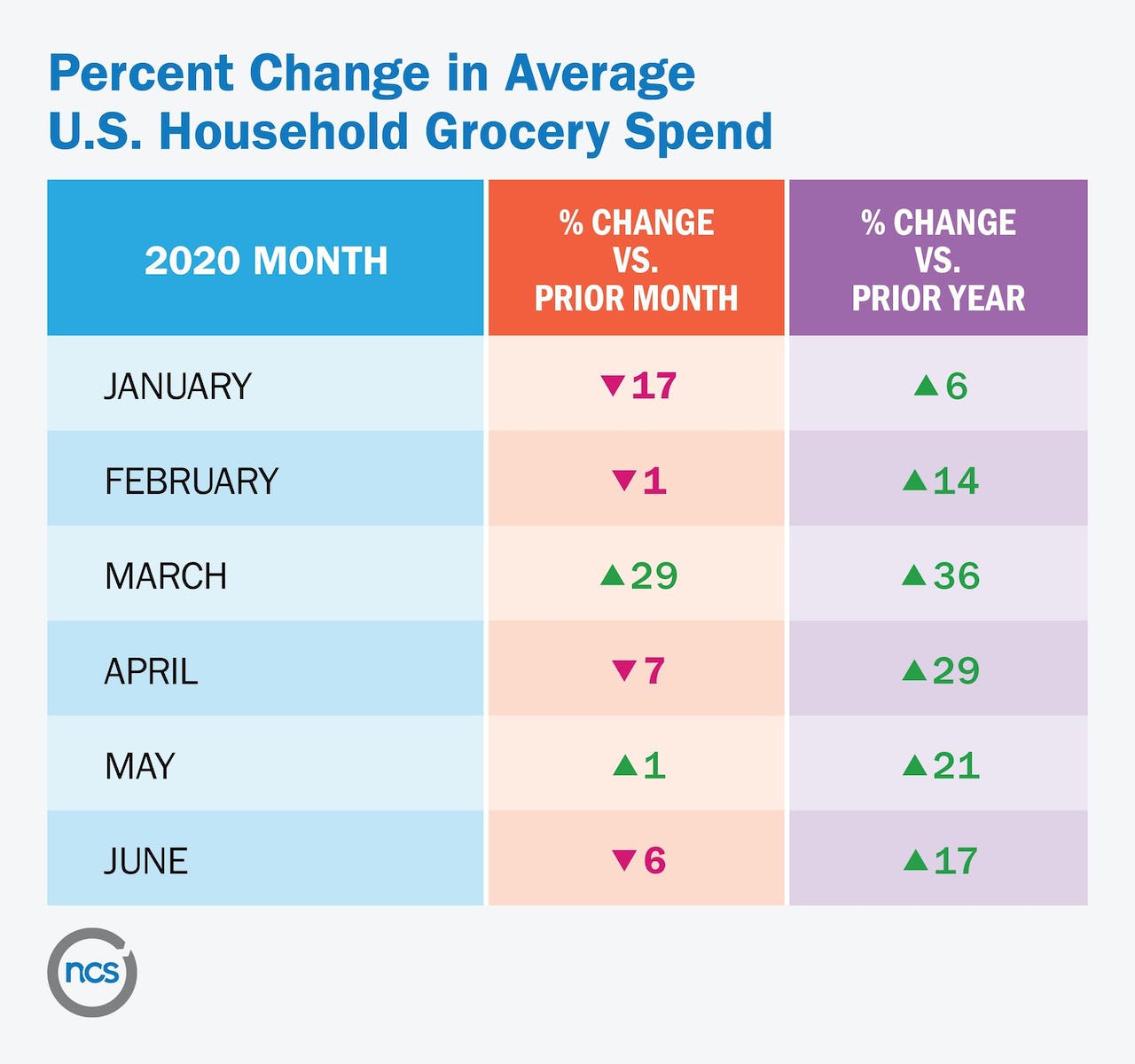 “The weather is warmer and restaurants have been opening their outside seating areas,” said Linda Dupree, CEO, NCSolutions. “Many states are reopening gradually with limits on capacity. As a result, even as Americans take advantage of these opportunities, they’re doing so less than in previous summers. People are still largely eating at home, in turn, creating a higher-than-normal need for CPG products and a continuing opportunity for CPG brands to advertise and influence these expanded product sales.”

The combination of graduations, holidays and warmer weather contributed to higher household spending on CPG categories such as alcohol, frozen foods and meat, both during June 2020 and the full stage of Home-Confined Buying from March 22 onward. Meat continues to be one of the highest performing categories with sales 27% higher in the Home-Confined Buying phase as compared to the same time period in 2019. 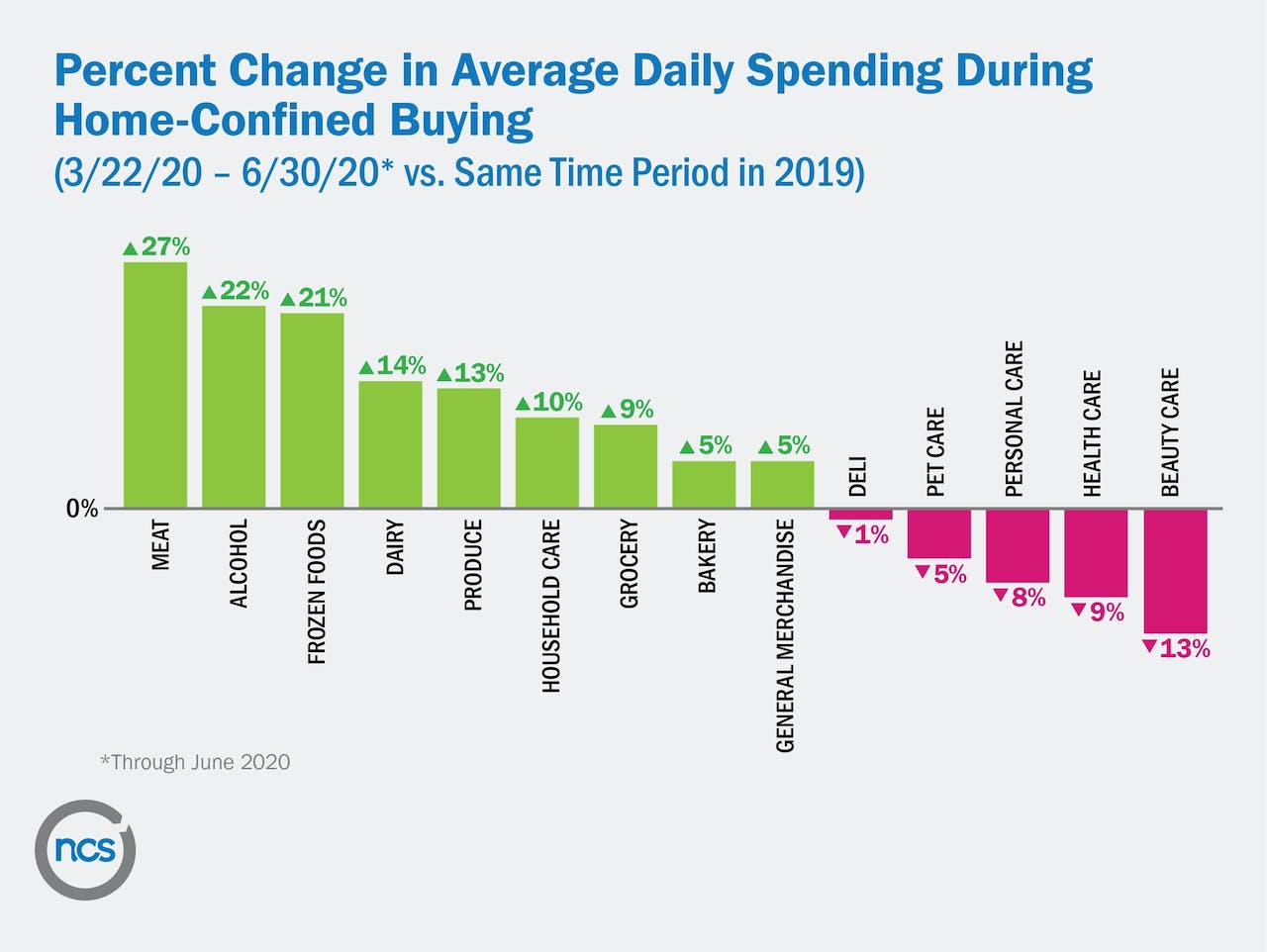 In the latest findings, sales of alcohol are 22% higher in the Home-Confined Buying phase through June 30, compared to the same time period last year. Sales of beer, in particular, are especially high, up by 23% for this period. The daily household spend on this item was 1.5 times higher than the minimum household spending since the beginning of 2019. 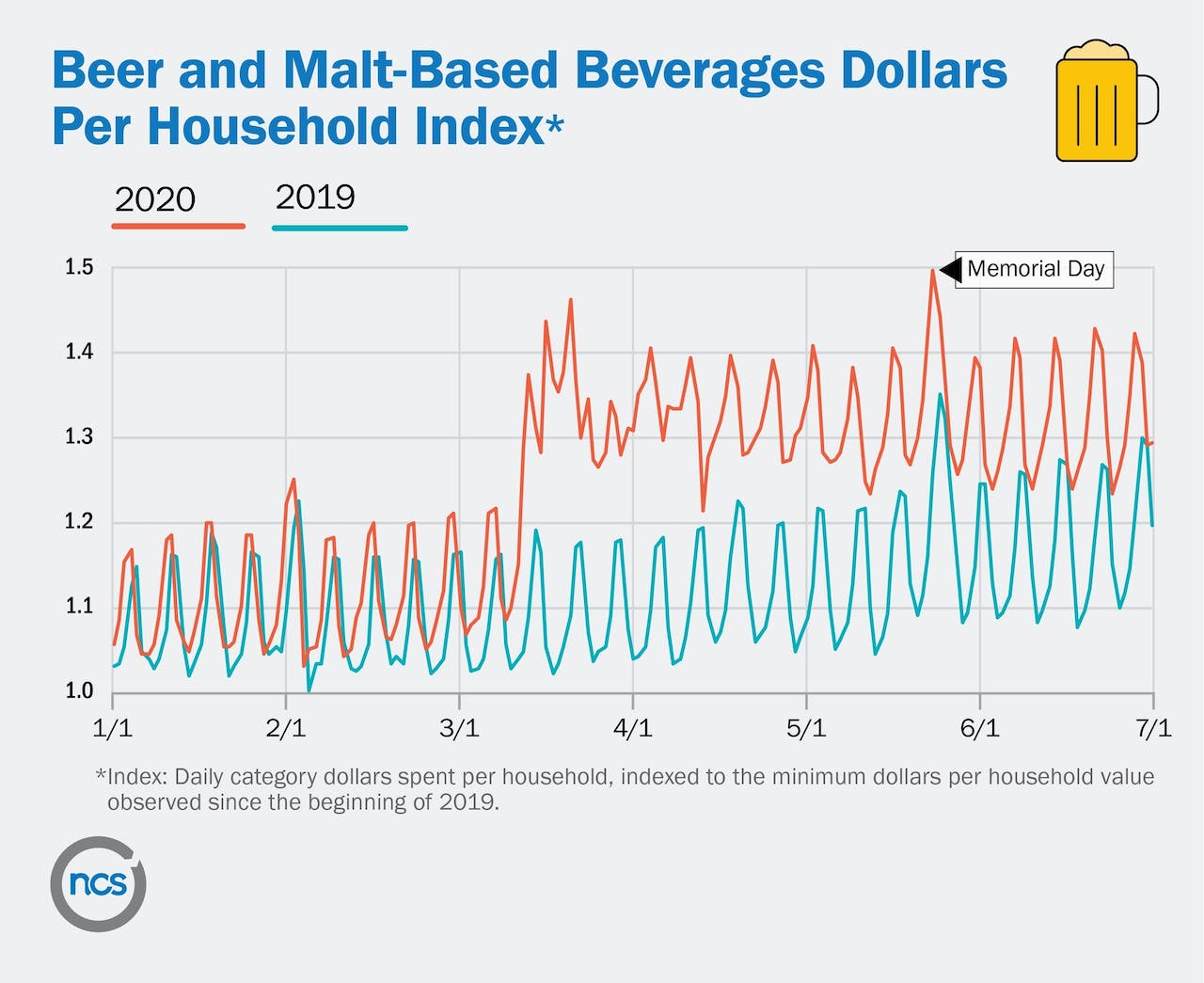 Sales of frozen poultry, a top-growing category in June 2020 vs June 2019, have been significantly elevated since the Extreme Buying phase in mid-March. However, daily household spending peaked again at the end of April before falling through much of May in response to news reports about potential meat and poultry shortages. As spending declined on frozen poultry, sales of frozen seafood, which had been on the rise since March, peaked in early May as consumers turned to it as a substitute. 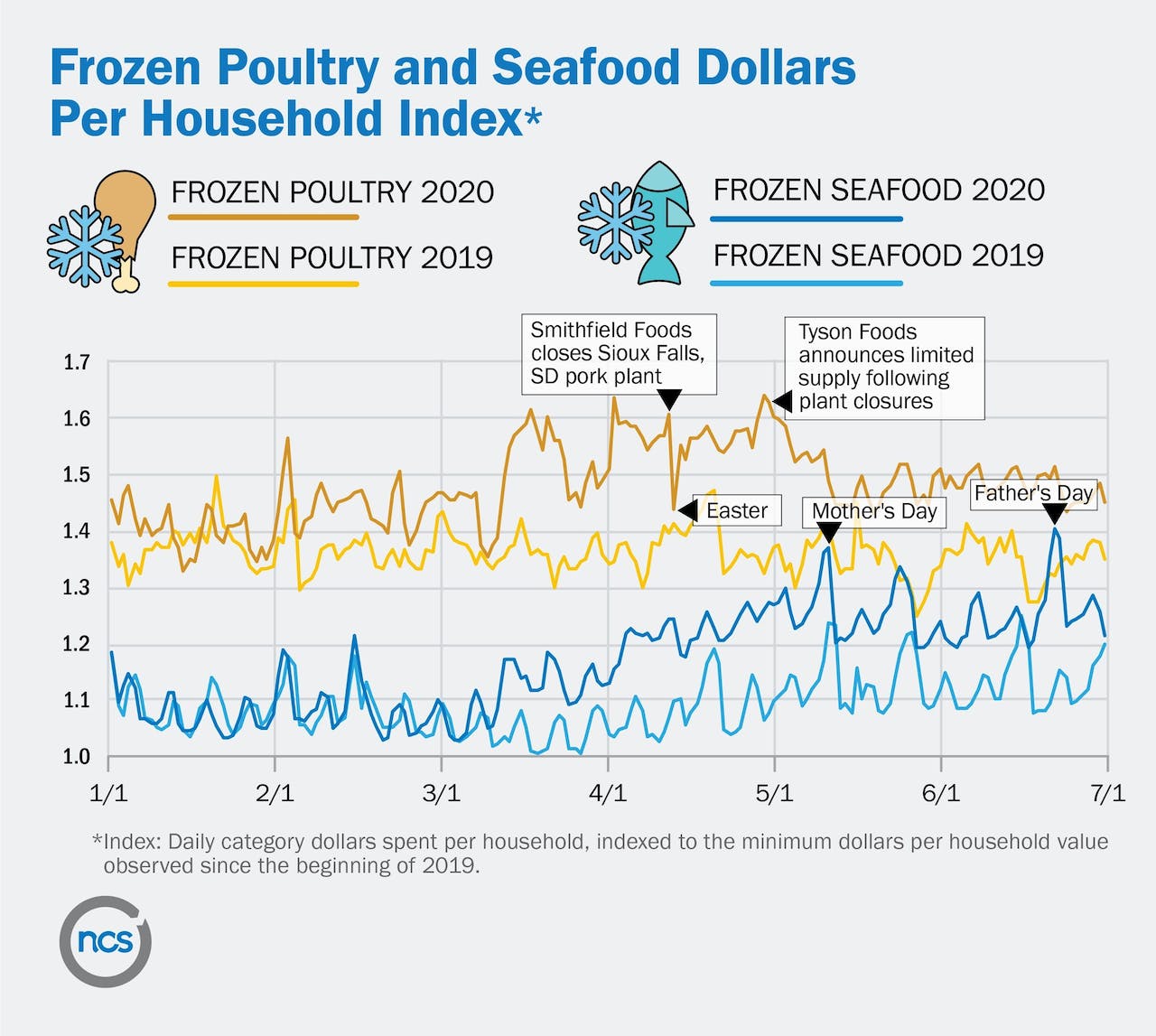 At the same time, consumers continued to spend seasonally on items, following traditional buying patterns. Though they celebrated holidays and milestone events such as graduations differently — via Zoom or at a social distance — they purchased CPG items traditionally associated with such events. In the days leading up to Easter and Memorial Day, for instance, sales of bakery products and alcoholic beverages spiked in 2020, just as they did at the same points in 2019.

“Nearly all CPG categories spiked in March during the Extreme Buying phase, but our analysis shows that consumers made predictable choices at predictable times,” said Dupree. “Even with stay-at-home orders in place, many people were eager to keep as much normalcy in their lives as they could. They made plans to celebrate annual holidays like Easter, and they were determined to mark momentous occasions, such as graduations. That translated into higher sales of beer, wine and baking products in the days prior to these events. For CPG advertisers, these markers can be reliable predictors of consumer buying trends.”

News events also played a role in driving CPG purchase decisions after the initial Extreme Buying phase in mid-March. Sales of meat peaked for a second time on April 28, following reports of potential shortages due to the closure of meat processing plants. In addition, spending in the beauty category increased on May 10, about the time many states began to re-open. 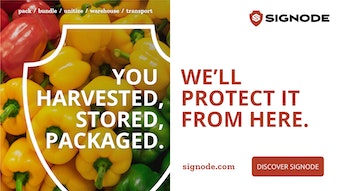 Your focus is your business. What’s ours? Protecting your products in transit. Discover how Signode protects products, brands, and bottom lines.
December 1, 2021
Latest

Your focus is your business. What’s ours? Protecting your products in transit. Discover how Signode protects products, brands, and bottom lines.
December 1, 2021