With dozens of ships carrying thousands of containers currently waiting to unload off the coast of California, Chilean exporter association Asoex has called on perishable cargoes to be given priority as vessels are unloaded. 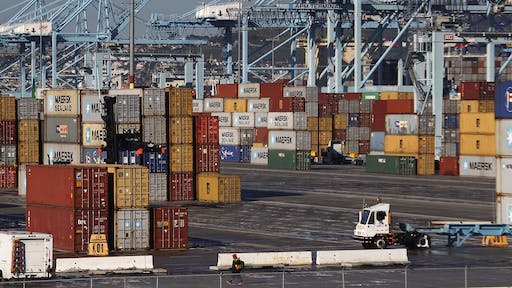 A dock worker arrives at the Port of Los Angeles on Monday, Feb. 23, 2015. Nearly all West Coast seaports began the week with dockworkers hustling to load and unload cargo ships that were held up amid a months-long labor-management dispute.

Work to reduce the billion-dollar backlog of cargo at U.S. West Coast ports got underway this weekend following the tentative labor agreement reached by port operators and dockworkers union on Friday, according to Fruitnet.com.

The deal comes after nine months of disruption at 29 Pacific ports which between them handle around a quarter of US maritime trade. No details have been released of the new five-year labor contract, which is still subject to ratification by both parties.

Gene Seroka, executive director of the Port of Los Angeles said it would take around three months “to return to a sense of normalcy”. Other industry analysts told the Wall Street Journal it could take anywhere from about two to six months to get the US supply chain back on track.

With dozens of ships carrying thousands of containers are currently waiting to unload off the coast of California, Chilean exporter association Asoex has called on perishable cargos to be given priority as vessels are unloaded. Fernando Sat, president of Asoex's Table Grape Committee said there were serious concerns within the industry about rising transportation costs and the quality of table grapes on the water.

"What's more, the shipping companies say the supply of vessels in the region is being restricted," he said.

Sat noted that an announcement by reefer companies that they are to increase their rates by $0.32 per carton, coupled with a decision to temporarily suspend container services to the port of Los Angeles were causing significant problems for exporters and would result in some companies being unable to fulfil their contractual obligations.

When beginning the journey to warehouse automation, it is important for today's food and beverage leaders to decide if they plan on retrofitting an existing facility or investing in an entirely new build.
Westfalia Technologies Inc.
May 2, 2022
Follow Us