The letter urges the sides to “quickly resolve their differences and put an end to the nine months of (contract) negotiations” and highlighted the negative impact increased port congestion is having on their constituents. 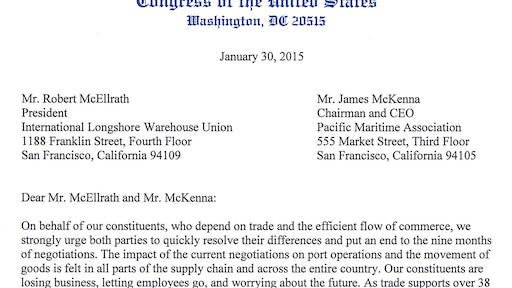 U.S. Reps. Dave Reichert, R-Wash. and Kurt Schrader, D-Ore. have sent a letter signed by 84 members of Congress to the International Longshore Warehouse Union (ILWU) and the Pacific Maritime Association (PMA) to end the contract dispute causing congestion at a Pacific port. The letter urges the sides to “quickly resolve their differences and put an end to the nine months of (contract) negotiations” and highlighted the negative impact increased port congestion is having on their constituents, the supply chain and the broader economy.”

“On behalf of our constituents, who depend on trade and the efficient flow of commerce, we strongly urge both parties to quickly resolve their differences and put an end to the nine months of negotiations,” the letter stated., “The impact of the current negotiations on port operations and the movement of goods is felt in all parts of the supply chain and across the entire country. Our constituents are losing business, letting employees go, and worrying about the future. As trade supports over 38 million jobs across the country, we strongly urge your organizations to reach an agreement, because the inability to reach consumers outside our borders impacts jobs here at home.”

The Reichert/Schrader letter cited the National Retail Federation and National Association of Manufacturers economic assessment of a Pacific port shutdown, which claims over $21 billion in costs for 10 days and impacting 169,000 jobs. “Moreover, even if a resolution is reached quickly, our constituents will endure months of attempting to clear the backlog at ports and some business may never be recovered,” the letter states.

The Week Ahead in 60 Seconds: 'Trade Issues Still Simmering'

U.S. Wine Exports Are Treatened By Union Talks Of Strikes

For grocers, succeeding in this new landscape will require investments in crossover technologies that combine the best shopping experiences in both their online and offline stores.
Shopic
September 22, 2021

Placing the responsibility for all warehouse locations in the hands of a single third-party service provider can be risky. Here’s why vendor diversification is particularly valuable in warehouse services.
Merit Logistics
September 15, 2021