Based in Commerce, CA, Smart & Final caters to caterers -- as well as small businesses, restaurants and individual households in the western U.S. Its 285-plus non-membership warehouse stores stock groceries, party supplies, paper products, cleaning supplies and more, in bulk sizes and quantities.

The Smart & Final DC reslot was completed in one weekend with no significant impact to customers. Smart & Final stores immediately noticed a difference, and responded positively. Labor savings for product slotted in the DC by store aisle/section was assessed, and showed a 15-20 minute savings in store processing per load, which equated to an annual savings of $300,000 for stores.

Furthermore, the reslot realized a two to three percent improvement in DC selecting productivity, which equates to over $100,000 per year in labor savings. Moreover, Smart & Final worked with Optricity to successfully develop an ongoing maintenance program. In addition to applying OptiSlot to this project, Optricity worked with Smart & Final to reconfigure the placement and direction of case flow racks and pick path sequence to reduce over ten percent of the total travel from the pick path.

Tangentially, working with OptiSlot allowed for the creation of a separate pick path for caustic items, thereby isolating them from edibles.

Having recognized the need for change in one of its warehouses, which was built in 1999, Smart & Final looked to slotting to align the DC with the activities that had transpired over the last decade, including the addition of 3000 low velocity items, and the natural outflow of old items and inflow of new items, among other changes.

To improve productivity and better handle new items with changing sales patterns, Smart & Final selected Optricity and its OptiSlot solution for the reslot.

“We evaluated a number of options, but we particularly liked the OptiSlot features related to slot move execution and ability to labor plan and control workload,” says Tom Paolucci, director of distribution for Smart & Final. “Plus, we chose Optricity for its slotting expertise and because we knew we’d need the attention and support that only a small company can provide.”

Although the company’s original objective was simply DC optimization, OptiSlot’s capabilities eventually lead Smart & Final to expand its goals to include reducing store labor by grouping product in the DC, improving store efficiency without negatively impacting the DC, improving slotting as it related to safety, ergonomic, and associate concerns and developing an ongoing slotting maintenance program, all of which were satisfied by the completion of the project. 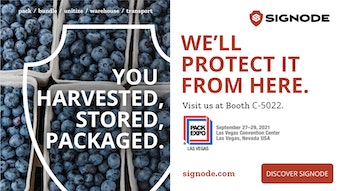 Your focus is your business. What’s ours? Protecting your products in transit. Discover how Signode protects products, brands, and bottom lines.
September 1, 2021
Latest

The Rise of the Hybrid Shopper: How COVID-19 Shaped 2021 Grocery Trends

As customers have grown more familiar with all the shopping methods at their disposal, the convergence of safety concerns, desire to stock up and supply constraints during the pandemic’s height resulted in a massive increase in food e-commerce.
84.51°
August 24, 2021

Partnering with a logistics provider that optimizes warehousing and transportation is a supply chain sustainability solution that can help food and beverage companies effectively reduce their carbon footprint.
A. Duie Pyle
August 16, 2021

The Future of In-Store Robotic Automation

The technology for AMRs is advanced enough to be applicable to a wide range of in-store functions.
Brain Corp.
August 5, 2021

Instacart unveiled its first phase of its next-generation fulfillment initiative that will bring automated technology solutions to retailers across the United States and Canada.
Instacart
July 23, 2021

The time has come for retailers to evaluate their operations and begin to implement innovative automated solutions to stay competitive and modernized.
AutoStore
July 22, 2021