Spot truckload rates are nearing an all-time high in the week ending May 3, just one year after the economy bottomed out because of the COVID-19 pandemic. 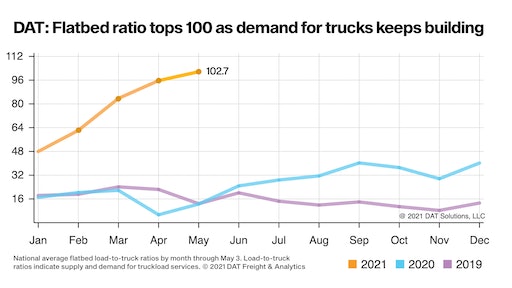 Spot truckload rates are nearing an all-time high in the week ending May 3, just one year after the economy bottomed out because of the Coronavirus disease (COVID-19) pandemic.

There is an expected boom to occur this coming week as the country celebrates Mother’s Day. According to DAT, the last two weeks saw nearly 70 truckloads per day leaving Miami, where 80% of all flora volume is handed, by three carriers. Outbound reefer volume from Miami last week increased 31%, averaging out at $3.70 a mile to New York City. Miami to Chicago average $2.74 per mile, Miami to Atlanta averaged $2.77 per mile and Miami to Los Angeles averaged $1.86 per mile.