The best collision avoidance system is a well-trained driver. 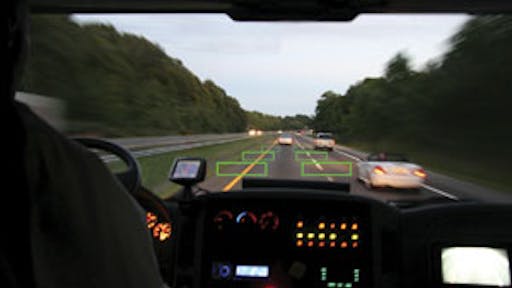 According to the Federal Motor Carrier Safety Administration's (FMCSA) National Crash Facts for 2007, there were 136,438 large trucks involved in non-fatal crashes on the highways of the U.S. In that same year there were 54,961 crashes that proved to be fatal.

This makes for a total of 191,399 accidents involving large trucks. In addition, FMCSA notes that the average cost per truck crash during the years 2001-2003 (the latest years for which figures are available), was approximately $91,112. This accounts for more than $17 trillion lost to fleets through accidents in 2007 alone, to say nothing about the incalculable loss of human life.

Santa Ana, CA-based Iteris Inc. is a provider of lane departure warning systems through its Autoview product. The system includes a camera that is positioned on the windshield of a truck. It looks out in the front of the vehicle at the lane markings on the road and, using a beam, tracks the position of the markings relative to the truck's position.

Should the truck begin to cross over the road markings, to either the left or the right, the system will alert the driver with a loud "rumble strip" sound in the left or right speakers positioned in the cab. Based on where the auditory cue is coming from, the driver will make an adjustment to his course.

"We've surveyed hundreds of drivers and they say it makes them safer drivers and also helps reduce accidents," notes Francis Memole, senior vice president of vehicle sensors for Iteris. "Ninety percent of them like the system, which is pretty phenomenal."

"The lane departure system is a great product, our drivers love it," agrees Don Lacy, safety director for Prime Inc., a Springfield, MO-based carrier. The company maintains a huge fleet of 3,200 power units and hauls refrigerated, flatbed and tanker trailers. "The equipment it's installed on has a much better safety record in the area of 'run off the road' type accidents, especially rollovers."

Ryder Systems Inc., Miami, has a pilot program in place with the lane departure warning systems as well.

"We have 50 units installed for the pilot and it really does work," says Tony Montalbano, group director of safety division, for supply chain solutions at Ryder. "It's designed to prevent collisions related to distraction."
Montalbano states the system is also successful at waking up drivers who are allowing their vehicles to drift due to driver fatigue and while the system is not an answer in itself to preventing fatigue, it does help prevent head-on collisions.

The OnGuard Forward Collision System offered by Meritor Wabco, Troy, MI, which operates by using radar, is designed to monitor the vehicle directly in front of a truck. If the system detects that a potential collision is developing, it sends audible and visual warnings via an in-cab dash display to the driver, who is alerted to take appropriate action to prevent a crash. The warnings vary in intensity as the vehicles get closer.

"The natural tendency in designing these systems is to be way too conservative. They end up sending out too much information to the driver," says Peter Sweatman, director of the University of Michigan's Transportation Research Institute. "With too much information, drivers tend to tune out and have much less respect for the system."

"OnGuard also has an adaptive cruise control mode, which the driver can engage or disengage at his own discretion," says Alan Korn, director of vehicle dynamics and controls for Meritor Wabco. "In this mode, OnGuard automatically attempts to maintain a safe distance behind the lead vehicle, accelerating or decelerating as needed,"

"It does this by the radar sensor realizing what the lead vehicle is doing and adjusting the speed by dethrottling the engine, applying the engine brake and the foundation brakes."

According to Korn, a truck needs to have a stability control system already in place in order for it to be capable of automatically applying foundation brakes.

A drawback to adaptive cruise control systems is the fact that these systems are blind to stationary vehicles that may be stopped in a queue on the highway or vehicles that may have broken down in front of the truck. If a driver's attention is taken away before he notices the queue, the system will not warn him of the situation. This is why ACC is in no way a substitute for an alert driver.

"It's important to note that forward crash warnings systems do detect stationary vehicles, but the ACC does not, it tunes them out," says the University of Michigan's Sweatman.

Gary Strausbaugh, vice president of transportation for Mennel Milling Co. in Fostoria, OH, maintains a fleet of 55 units. His company uses the Eaton Vorad Forward Collision Avoidance System on many of the units and says the system is practically maintenance free.

"If it's on cruise, the system will actually defuel the truck and hit the Jake brake if the driver is drowsy and the lead vehicle slows. It's not a substitute for a driverless truck though."

Strausbaugh says drivers with ACC systems have a general complaint about loss of power if someone suddenly cuts them off on the highway. If the truck has a jake brake, it will cut the fuel and hit the jake, which means the truck takes a few minutes to get back up to its cruise speed.

Prime Inc. has also had the Vorad system installed on its fleet for a number of years to great effect. Though Prime's Lacy says that driver acceptance is another issue.
"Some of our drivers have learned to disregard the signals. Sometimes they'll even disable it--all they really have to do is cover up the antennae."

"These systems have limits," explains Fred Andersky, marketing manager for Bendix Commercial Vehicle Systems LLC, Elyria, OH. The company supplies active safety technologies, air brake charging and control systems and components for trucks. It is in the process of launching its own adaptive cruise control system. "We sometimes use the term 'collision mitigation' because it's not going to help you avoid every accident."

According to Andersky, truck drivers need to understand that forward collision avoidance systems are not a replacement for their own good driving practices or the fleet's driver training efforts. "The fact is, we can slow a vehicle down, but we can't make it stop on a dime. We need the driver to be doing his job as well."

Bendix has been building its new adaptive cruise control system for trucks on top of the Bendix Full Stability System. Thanks to the stability system's yaw sensor, this interface actually provides more options for a driver to avoid a crash situation.

"The system might engage with the breaks, but the driver realizes he's not going to stop in time and while we're taking the energy out of the way, he realizes the right or left lane is clear, so he swerves to avoid the car ahead of him," says Andersky.

By having the collision avoidance system built into the stability system, Andersky says the driver can make the swerving maneuver and not worry about the possibility of getting into a loss of control situation that might result in a rollover.

In general, lane forward crash warning systems are extremely effective at helping to warn drivers of imminent crashes and allowing them to reduce their vehicles' forward momentum so that if they cannot avoid a crash, they can at least strike the vehicle in front of them with less energy.

From Bad to Worse to Better: Build Flexibility in Processes, Now

The decision for many fleets comes down to whether or not to structure their agreements through a full-service lease (FSL) or that of an unbundled lease (UBL) agreement.
Fleet Advantage, LLC
December 21, 2021