Automation from Cimcorp will ensure availability across Alimerka's fruit and vegetable product range, as well as security of supply to its retail stores. 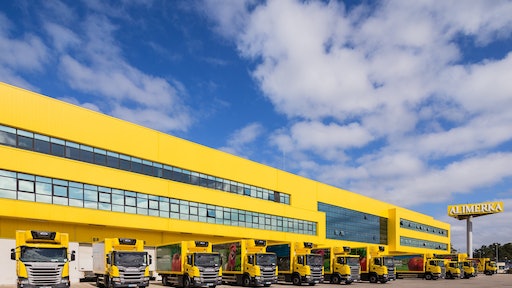 Cimcorp announces the company has received an order to automate the distribution of fresh produce for the regional Spanish grocery retailer, Alimerka. Robotic systems at the company's Lugo de Llanera distribution center, just north of Oviedo, will serve all 173 of Alimerka’s stores across Northwest Spain, as well as another dozen or so customers of the group's fresh produce distribution subsidiary, Codefrut.

Automation from Cimcorp will ensure availability across Alimerka's fruit and vegetable product range, as well as security of supply to its retail stores. The company sets high standards of quality and service and demands the same from its suppliers. “We expect strict project management from Cimcorp in the implementation phase,” said Alimerka's CEO, Alejandro Fernández González. “We’ve seen what the company has done for other grocery retailers, and that the Cimcorp team understands the challenges with fresh produce. We cannot have any delays due to disruption. Over 150,000 families a day rely on food being available in our stores."

Family-owned Alimerka is a leading grocer in its home region of Asturias—where it has one-third of the market share—as well as in the neighboring regions of Galicia and Castile and León. According to González, Alimerka has always taken pride in being an innovative company, committed to securing food production and therefore work opportunities in Asturias. "We have 6,000 employees and we buy from local producers and farmers. Our commitment to the area is one of the reasons why our customers are loyal to us."

Kai Tuomisaari, Cimcorp’s Vice President, Sales, said, “When dealing with food, and especially with perishable products, accuracy and reliability are essential. Everything has to be done quickly, as these products do not store well. The less time they spend in the distribution center, the sooner they are in stores and available to customers.”

No less than 120 tons of fresh produce pass through the Lugo de Llanera distribution center every day, six days a week, being handled in plastic crates to prevent bruising and ensure excellent quality from the field to the shelf. “With this automation, we want to ensure that there are no unscheduled stoppages,” explained González. “Imagine if the automation didn’t work for one day: the stores would not receive fruit and vegetables, the produce in the logistics center would no longer be as fresh, and there wouldn't be space for the 120 tons coming in the next day. We have to have a reliable solution so that the hard work, time and money invested in fresh produce doesn’t go to waste. This is why we have invested in fresh food automation from Cimcorp.”

To secure a longer lifecycle for the automation and avoid any unscheduled stoppages, Alimerka is also investing in preventive maintenance and 24/7 help desk support from Cimcorp. “Automation comes with a price tag,” commented González. “But when you invest in high-quality automation, it ages well. Nevertheless, all automation has wearable parts that need to be replaced from time to time. Who better to maintain and repair the solution than the people who designed and installed it in the first place? Alimerka wants to get the most out of this investment, so we want to take care of it in order that it will last several decades.”

Commenting on the order, Jarkko Hakkarainen, General Manager of Cimcorp Iberia, said, “We already have a strong customer base in Spain and established offices in Madrid, but this deal with Alimerka strengthens our profile in the country. It also proves Cimcorp's growth strategy—that the decision to expand our presence into some of our key markets has paid off and that our comprehensive service network through our parent company, Murata Machinery, Ltd., is valued by both existing and new customers.”