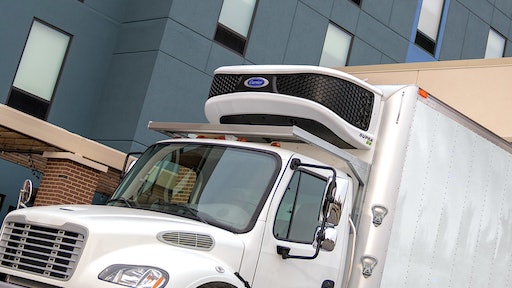 Joining the Supra S6 model, which was introduced in 2019, are the S7, S8 and S9 models, providing solutions for trucks ranging from 10 to 28 feet in length. Using about 50% less refrigerant, all four models provide greater cooling capacity* than prior models – up to 20% more, depending on model and operating conditions.

“Improved efficiency means fuel economy is significantly improved,” Parker said. “For example, a Supra S7 unit consumes about 37% less fuel than its predecessor. When parked and operating on electric standby power, models in the new Supra series deliver refrigeration capacities* that approach or are equal to their capacities when engine-driven, surpassing some competitive products, which can lose up to a quarter of their capacity when running on electric standby.”

The platform’s new architecture streamlines the refrigeration system into a configuration using 42% fewer unique components than earlier models. To reduce service requirements, the series includes design enhancements, such as the use of maintenance-free fans and upgrades that enabled the oil-service interval to be extended by 33% to 2,000 hours, among other improvements.

A wrap-around honeycomb grille provides a more contemporary appearance and is removable for easy access to internal components.