The Port of Savannah acquired 145 contiguous acres to its annual capacity. 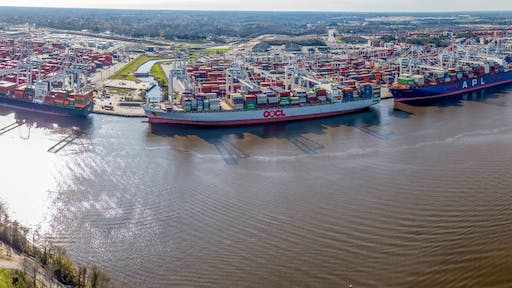 At the Georgia Foreign Trade Conference Tuesday, Griff Lynch, executive director of the Georgia Ports Authority, announced the acquisition of 145 contiguous acres to the Port of Savannah, or more than 1 million twenty-foot equivalent container units in annual capacity.

"As the Georgia Ports Authority enters its 75th year, we are proud to follow in the tradition of those who came before us, making exciting advances in capacity and technology to ensure our terminals remain at the forefront of global commerce," Lynch said. "This is the largest addition of container terminal space in Savannah in more than 20 years, and represents a powerful opportunity for Georgia to take on new trade."

During his presentation, Lynch also announced that Garden City Terminal dock construction had been completed, and can now serve three 14,000-TEU vessels, and up to eight vessels simultaneously.

The improved dock and additional container yard space are part of a larger blueprint to increase the GPA's capacity to more than 9 million TEUs by 2030. By 2023, the GPA will add an additional berth, for a total of four big ship vessel slots.

"The expansion at our deepwater ports in both Savannah and Brunswick is helping to fuel growth, and in turn investment, jobs and increased competitiveness on the global stage," said GPA Board Chairman Will McKnight. "With the kind of investment and infrastructure development announced today, Georgia's ports will undoubtedly stay ahead of the curve and the competition."

In order to improve service, Savannah's Ocean Terminal will be partially converted to handle containers. Renovations at Ocean Terminal, located just downriver from the main container port, will include a new truck gate, upgraded container yards and rubber-tired gantry cranes for container operations.

"This exciting new development will allow the GPA to continue to meet and exceed the needs of our customers," Lynch said.

Construction is currently under way on the upgrades. Phase I of the Ocean Terminal container yard is expected to be completed by the end of 2020.

Lynch also outlined plans for the new Savannah Container Terminal, a nearly 200-acre facility to be built on Hutchinson Island. The new facility will have a capacity of 2.5 million TEUs when fully developed. Phase I is projected to come online in 2025.

To ensure the GPA remains on the cutting edge of port staffing and technology, Lynch announced an expansion of the Authority's Y.E.S (Youth learning Equipment and Safety) program, in which high school graduates are hired and trained for equipment operator careers. GPA hopes to begin hiring 50 recent graduates per year to help meet staffing needs.

"The GET SET program is a competitive juried contest for college students in Georgia, in which they will be challenged to put forth innovative solutions to issues faced by the maritime logistics community," Lynch said. "Students or student teams submitting winning entries will receive a cash prize totaling $25,000."

He said the Authority will be working with universities across the state to integrate the GET SET program into their curricula over the next year, with the first prize being awarded in the summer of 2021.