The terminals to be put up for sale include Dutch Harbor in Alaska and Global Gateway South in Los Angeles. NOL also operates terminals in China, Taiwan, Japan, Vietnam and Thailand. 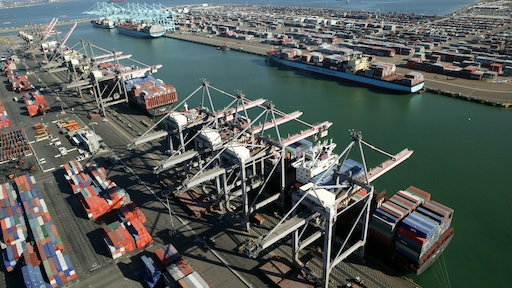 The terminals to be put up for sale include Dutch Harbor in Alaska and Global Gateway South in Los Angeles.

CMA CGM is looking to raise as much as $1 billion by selling port assets of Singapore’s Neptune Orient Lines (NOL), including some in the U.S., to cut its debt, people familiar with the matter said Tuesday, according to Hellenic Shipping News. The terminals to be put up for sale include Dutch Harbor in Alaska and Global Gateway South in Los Angeles. NOL also operates terminals in China, Taiwan, Japan, Vietnam and Thailand.

CMA CGM didn’t respond to a request for comment.

CMA CGM, the world’s third-largest shipping line by capacity, recently concluded its acquisition of NOL, paying $2.4 billion in cash for the container firm. Including NOL’s debt, the deal was valued at about $5 billion. As of June 30, CMA CGM’s adjusted net debt stood at $8.2 billion.

The purchase kicked off a rare round of consolidation in the highly fragmented shipping industry, which is struggling to emerge from one of its longest-ever slumps.

Editor's Insight: On one hand, the expansion of the Panama Canal is expected to generate more container traffic for U.S. East Coast ports from Asian exporters. At the same time, the global slowdown in trade continues to pressure ocean carriers. The slowdown has contributed to the recent Hanjin Shipping bankruptcy, Maersk’s decision to reduce port calls, and an increase in mergers and vessel sharing agreements among carriers.

The current low carrier rates might be attractive to exporters, but if the downturn in activity results in reduced port calls, exporters will have fewer options.