The national average spot van rate hit its highest level since January and load-to-truck ratios for all three equipment types surged during the week ending Dec. 8 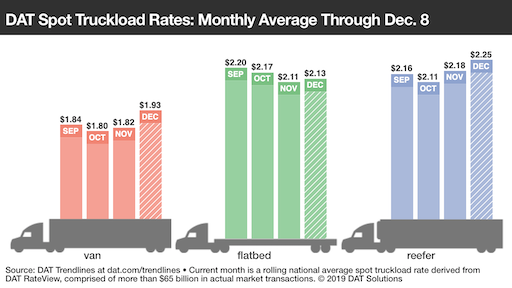 Demand for truckload van and refrigerated capacity is expected to remain strong through the end of the year and into early January as retail goods and groceries move through the supply chain during the holidays.

Pricing moved higher on 77 of DAT’s top 100 van lanes by volume while eight lanes declined and 15 were neutral. The national average van load-to-truck ratio hit 4.0 last week, meaning there were four loads available for every truck posted to DAT’s load board network. That’s almost double the average since the start of November.

Lanes with gains: Load volumes were up nearly 30% out of the Laredo, Texas, freight market and about 20% in the Phoenix market compared to the previous week. Some of the largest van lane-rate increases last week were out West:

The national average spot reefer rate has been on the increase since October. Rates were higher on 42 of the top 72 reefer lanes by volume last week while only seven lanes dropped.

Lanes with gains: Lanes from Tucson, Ariz., Philadelphia, and Elizabeth, N.J.—all significant produce markets—saw nice increases in their average rates. Among them:

Due to global quarantine, the food supply chain in the US has been upended, increasing pressures on the systems, retailers, distributors and companies in the food industry. I
April 1, 2020