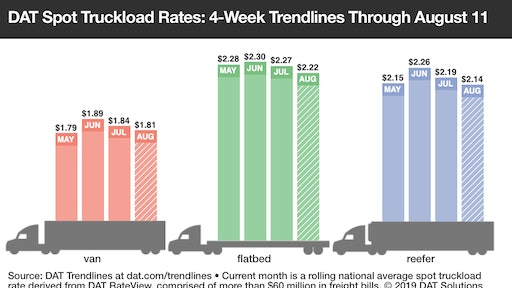 Spot truckload freight volume increased 1.2 percent during the week ending August 11, with the availability of spot reefer and flatbed freight making up for a decline in van loads, said DAT Solutions, which operates the industry’s largest network of load boards.

Van volume slipped 3 percent last week, and 57 of DAT’s top 100 van lanes by volume had lower rates. Among the few positive markets was Buffalo, where van freight volume increased 3 percent compared to the previous week and the average outbound rate rose 7 cents to $2.08 per mile. Otherwise, spot van volumes have been sliding over the past four weeks, especially in large Southeastern freight hubs:

The national average van load-to-truck ratio dropped from 2.2 to 2.1. That’s nearly a full point lower than the August 2018 average.

Demand for reefer trucks trailed off in California and Texas last week, and the majority of high-traffic reefer lanes paid lower last week. There were early signs of activity shifting northward, as significantly higher volumes from Denver (up 34 percent) and Grand Rapids (up 71 percent) helped elevate the national average reefer load-to-truck ratio from 4.2 to 4.3.