Spot truckload freight posting volume was virtually unchanged during the week ending March 31 while the number of truck posts increased 5 percent, keeping van and reefer rates in check during the final week of March and Q1 2019. 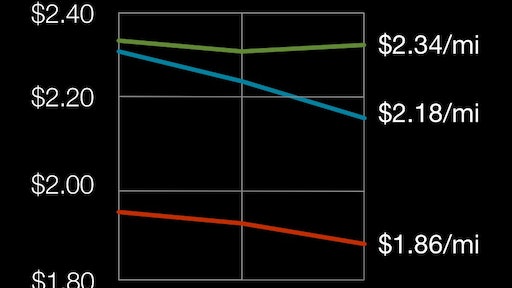 Spot truckload freight posting volume was virtually unchanged during the week ending March 31 while the number of truck posts increased 5 percent, keeping van and reefer rates in check during the final week of March and Q1 2019.

Last week’s relatively quiet freight market was in keeping with the rest of the month, said DAT Solutions, which operates the DAT network of load boards.

The national average van load-to-truck ratio climbed to 2.3 at the end of last week but with ample capacity to meet demand, rates failed to rise. Typically the van ratio has to climb above 2.5 to 3.0 before there is sustained upward pressure on spot prices.Meanwhile, average rates on 56 of the top 100 van lanes were lower while only 38 rose. Six lanes were neutral.

Markets to watch: Freight volumes out of Denver plunged yet the average outbound rate rose because of sharp increases on two high-volume lanes:

The lack of spot reefer freight is hurting prices. On the top 72 reefer lanes last week, 42 lanes were down, 24 were up, and six were unchanged. The average reefer load-to-truck ratio in March was 2.9, down from 3.7 in February.

Weather in the Midwest and Plains is taking a toll on agricultural production and transportation. The average outbound rate fromGrand Rapids, Mich., fell 19 cents to $3.06/mile, and two lanes keyed last week’s slump:

At $2.39/mile, the national average spot flatbed rate has risen for five consecutive weeks. In the top 78 flatbed lanes, rates moved higher on 36 lanes while 42 were lower, although flatbed rates have increased 4 percent overall in the past two weeks.

Markets to watch: Plenty of flatbed markets in the South and East experienced rising spot rates last week, and one lane in particular caught our attention: Houston to Oklahoma City jumped 38 cents to $2.55/mile. That’s a good sign for oil and gas activity.