The number of available loads on the spot truckload freight market fell 4.6 percent during the week ending Dec. 15, running counter to the typical seasonal bump in demand for trucks. 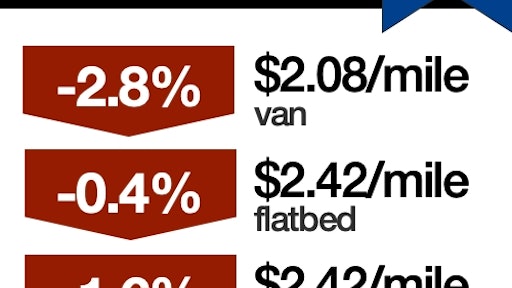 The number of available loads on the spot truckload freight market fell 4.6 percent during the week ending Dec. 15, running counter to the typical seasonal bump in demand for trucks, said DAT Solutions, which operates the DAT network of load boards.

Van trends: The national average van rate was $2.08/mile last week. Spot van rates may be slipping but the linehaul or “demand” component has strengthened in recent weeks, indicating the influence of falling fuel prices on current rates. The average price of on-highway diesel was $3.12/gallon on Dec. 17, a 4-cent decline compared to the previous week.

Outbound spot van rates were softer in major markets, including Chicago ($2.51/mile, down 5 cents); Columbus, Ohio ($2.50/mile, down 3 cents); Los Angeles ($2.55/mile, down 13 cents); Memphis ($2.29/mile, down 7 cents); and Buffalo ($2.56/mile, down 10 cents). The absence of demand in the Northeast is an indication that shippers increased their use of intermodal and contract carriers for holiday freight.

Flatbed trends: After a 103 percent increase the previous week, the number of flatbed load posts were down 4 percent while truck posts slipped 3 percent. As a result, the national flatbed load-to-truck ratio dipped from 19.8 to 19.6 loads per truck.

Reefer trends: Reefer load posts were virtually unchanged following a 46 percent increase in load posts the previous week. The number of truck posts also remained the same, as did the national load-to-truck ratio at 6.3 reefer loads per truck.

Demand for fresh produce remains strong even though most fall crops have already been harvested in the U.S. and spring is still a few months away. A larger proportion of fresh fruit and vegetables are being imported from Mexico through a handful of border crossings in California, Arizona, New Mexico, and Texas. Notably, the average from McAllen, Texas, to Dallas was up 7 cents to $2.84/mile.

Elsewhere, rates on regional reefer lanes were unspectacular but solid:

Automation is the Epicenter of Supply Chain Resilience

Historically under-invested and the connection point between warehouses and over-the-road trucking, distribution yards are the ideal next place for autonomous systems.
Outrider
April 30, 2021