Spot Load, Truck Ratios Firm Up Ahead of November

Slight increases in the number of loads and trucks posted on the DAT network of load boards helped slow the downward roll of spot truckload rates during the week ending Oct. 27. 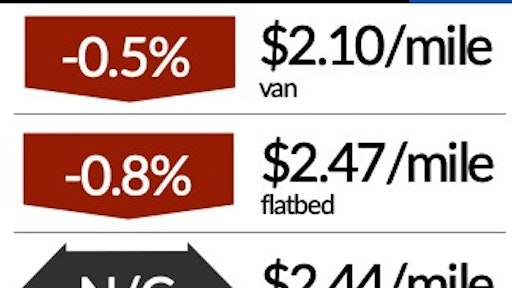 Slight increases in the number of loads and trucks posted on the DAT network of load boards helped slow the downward roll of spot truckload rates during the week ending Oct. 27, a signal that pricing may be firming up ahead of the holiday shipping season.

After two months of increases, the national average price of on-highway diesel fell for the second straight week, down 2.5 cents to $3.35 per gallon. Spot rates include a fuel surcharge portion.

VAN TRENDLINES: The number of van load and truck posts were nearly unchanged and rates were lower on 60 of the top 100 van lanes.

Demand for vans remains strong on the West Coast and boosted load-to-truck ratios in California, Oregon, Idaho, and Utah. This trend repeats every year as consumer goods from Asia arrive at the ports and move east.

Expect the capacity pressure in California to continue next month after a typhoon in Southeast Asia delayed ships bound for the Ports of Los Angeles and Long Beach, the arrival point for 49 percent of Asian imports. Last Friday, outbound loads outnumbered available trucks in Los Angeles by more than 10 to 1, lifting rates on lanes to Chicago, Dallas, Phoenix, and Denver.

REEFER TRENDLINES: The number of reefer load posts on DAT load boards increased 2 percent last week while truck posts rose less than 1 percent. Outbound traffic and rates were up at gateways for imports from Mexico, including McAllen, Texas ($2.14/mile, up 5 cents).