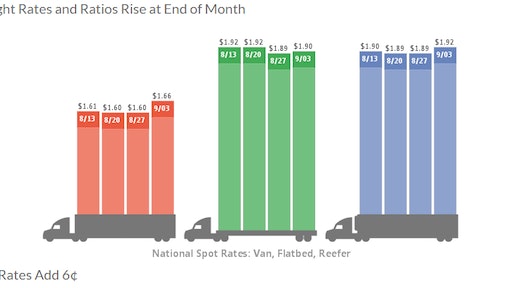 Load-to-truck ratios got a healthy boost, an indication that the higher rates may outlast end-of-month and pre-holiday pressure.

The spot truckload market finished August on the rise as the number of available loads jumped 8.4 percent during the week ending Sept. 3, according to DAT Solutions, which operates the DAT network of load boards.

Load-to-truck ratios got a healthy boost, an indication that the higher rates may outlast end-of-month and pre-holiday pressure.

In the Midwest, a four percent increase in freight volume sparked an 8-cent-per-mile jump to $1.99/mile on outbound lanes from Chicago. Rates out of Columbus averaged $1.90/mile, up six cents.

Other top-paying markets by region:

The number of reefer load posts increased 11 percent last week while capacity declined 2 percent. That boosted the reefer load-to-truck ratio 14 percent to 6.6 loads per truck. The national average reefer rate gained 3 cents to $1.92/mile including a 1-cent increase in the fuel surcharge.

In California, average outbound rates were generally strong including a 5-cent jump in the rate from Los Angeles ($2.46/mile). Idaho potato harvests led to higher volumes out of Twin Falls but outbound rates slipped leading up to the Labor Day weekend.

The number of flatbed load posts was steady while truck posts increased 4 percent. That pushed the load-to-truck ratio up 4 percent to 10.1 loads per truck. The national average flatbed rate was up a penny (due to the fuel surcharge) at $1.91/mile.