Falling national average spot rates leveled off compared to recent weeks, indicating the start of a possible rise heading into the Spring. 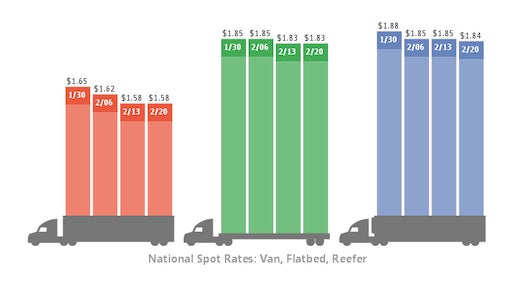 Falling national average spot rates leveled off compared to recent weeks, indicating the start of a possible rise heading into the Spring.

Shippers and brokers posted 4.1 percent more loads during the week ending Feb. 20 while the number of available trucks fell 2.0 percent, according to DAT Solutions, which operates the DAT network of load boards. Falling national average spot rates leveled off compared to recent weeks, indicating the start of a possible rise heading into the Spring.

In the van market, load posts increased 4 percent while available capacity declined 3 percent. The van load-to-truck ratio rose marginally from 1.3 to 1.4 loads per truck, meaning there were 1.4 van loads for every truck posted on the DAT network. Compared to the previous week, the national average van rate was unchanged at $1.58 per mile.

Flatbed load volume jumped 10 percent while capacity increased less than 1 percent. That yielded a 10 percent increase in the national flatbed load-to-truck ratio, from 9.6 to 10.6 loads per truck. The average flatbed rate held steady at $1.83 per mile.

The number of reefer load posts declined 6 percent while truck posts added 1 percent last week. As a result, the load-to-truck ratio fell 7 percent, from 3.1 to 2.9 loads per truck. The national average reefer rate fell to $1.83 per mile on a 1-cent fuel surcharge decline.

The national average diesel price was unchanged at $1.98 per gallon. On the spot market, freight brokers usually quote a one-time price that includes both a line-haul portion and a fuel surcharge; as such, declining fuel prices influence spot market rates significantly.