The governors want the House and Senate to enact a fully-funded, multi-year authorization bill that includes a sustainable revenue stream for the Highway Trust Fund. 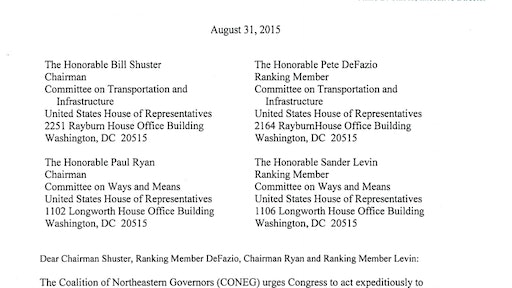 The Coalition of Northeastern Governors (CONEG) sent a letter to Congress urging action to ensure stability in the nation’s highway, transit, rail and safety programs.

The Coalition of Northeastern Governors (CONEG) sent a letter to Congress urging action to ensure stability in the nation’s highway, transit, rail and safety programs. The letter seeks support for the Highway Trust Fund through which many of these programs are funded. The current authorization for federal surface transportation programs is set to expire Oct. 29, 2015. The governors want the House and Senate to enact a fully-funded, multi-year authorization bill that includes a sustainable revenue stream for the Highway Trust Fund.

“Our states make major investments in the surface transportation networks that link communities, states, regions, and the nation,” the letter states. “From the roads, bridges, and transit stations that connect people to workplaces, services, and schools to the port, rail, and highway corridors that connect freight to markets, the investment in infrastructure drives growth, development, and creation of jobs across multiple economic sectors.”

The Senate has passed a highway bill to finance transportation projects until the end of October, but some Congressional lawmakers are concerned that it is not adequately funded.

Meanwhile, transportation advocates have sought an increase in the 18.4 cents-per-gallon gas taxes to cover infrastructure spending, but legislators have indicated they don’t want to raise taxes.

Some Congressional observers think the transportation issue will get sidelined by other issues, resulting in further funding delays.

There don’t appear to be any forthcoming solutions. There is not much individual companies can do about federal government action or lack thereof, but everyone has the power to be informed and to vote. Everyone can and should learn what action their legislators have taken on issues.

Such situations underscore the need for every industry member to not only be informed about such issues, but to support trade organizations that study these issues and lobby on the industry’s behalf. The American Trucking Associations (ATA), for instance, has supported fuel tax as the primary revenue source for highway improvements. 9-8-15 By Elliot Maras