The Senate voted 60-37 to advance the President's bid for "fast track" negotiating authority, the minimum number of votes needed on the procedural question, but final passage needs only a simple majority which would let Obama sign fast track into law. 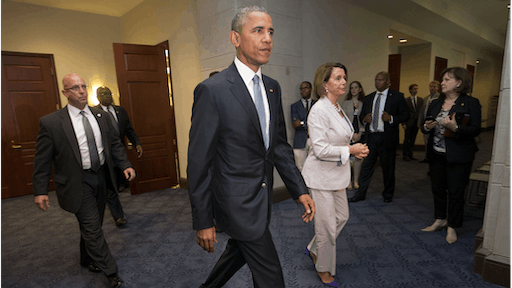 President Barack Obama's long-pursued trade agenda took a giant step toward becoming law on Tuesday, and opponents grudgingly conceded they now must fight on less-favorable terrain, according to the Associated Press.

A key Senate vote greatly brightened Obama's hopes for a 12-nation Pacific-rim trade agreement, a keystone of his effort to expand U.S. influence in Asia. The trade pact would be a high point in a foreign policy that has otherwise been consumed by crisis management, and would give Obama a rare legislative achievement in the Republican-controlled Congress.

The Senate voted 60-37 to advance his bid for "fast track" negotiating authority. That was the minimum number of votes needed on the procedural question. But final passage, expected no later than Wednesday, needs only a simple majority, which would let Obama sign fast track into law.

The president also wants to continue a retraining program for workers displaced by international trade. House and Senate support appears adequate, but even if that measure stumbles, the long-coveted fast track bill will be on Obama's desk.

"This is a very important day for our country," Senate Majority Leader Mitch McConnell, R-Ky., said. In the strange-bedfellows politics of trade, he was among the Republican congressional leaders vital in pushing the agenda forward, with only modest help from Democrats.