The new integrated reefer consolidation service from Halifax will allow the seafood community to ship deep-frozen product from Canada straight into the heart of Europe via its frozen cargo facility in the port of Antwerp. 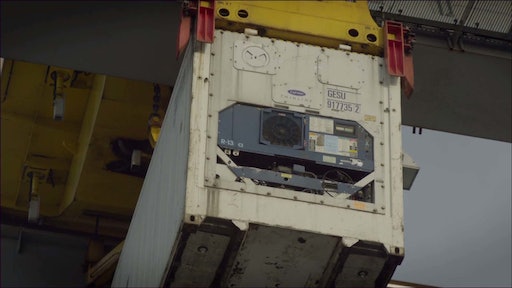 Foodcareplus announced the launch of the new deep-frozen reefer consolidation service from Halifax to Antwerp, allowing the Canadian seafood industry to market Europe easier. The launch of the weekly reefer service follows discussions during and after a tour organized by the Canadian Mission to the European Union (EU), the Port of Antwerp and Foodcareplus during the Global Seafood show in Brussels in 2014. Joined by the Minister of Foreign Trade Ed Fast and Canada’s EU High Commissioner David Plunkett, a Canadian delegation of lobster exporters discussed the logistics challenges and opportunities in light of the Comprehensive Economic and Trade Agreement between Canada and Europe (CETA).

When the CETA comes into force, almost 96 percent of EU tariffs for fish and seafood products will be duty-free. These products include frozen shrimp, lobster, scallops and mackerel. Canada’s fish and seafood exports to the EU worth an average of almost $400 million per year where they now face average EU tariffs of 11 percent with peaks to 25 percent. It is expected that the trade agreement will be ratified by the European Council and the Canadian parliament in 2015 coming into effect no earlier than 2016.

The new integrated reefer consolidation service from Halifax will allow the seafood community to ship deep-frozen product from Canada straight into the heart of Europe via its frozen cargo facility in the port of Antwerp. At this same location, physical quality inspection and veterinary examination will be performed by the Food Agency for the Safety of the Food Chain before the cargo is prepared for swift delivery to the final customer.

The service comes with two options. One is delivered.easy, which is the easiest and most straightforward service including collection of palletized cargo in Halifax, ocean freight into the cargo facility in Antwerp, full release with the food safety authorities, customs clearance and delivery. Initially, the service will cover Belgium, the Netherlands, Luxemburg, Germany, Austria, France, Italy, Ireland and the United Kingdom whereas other countries will be added as from September. The pickup.easy service on the other hand allows any European importer to pick up the cargo at the facility in Antwerp where they may choose to opt in on customs clearance.

The new service comes with an easy-to-use online application for all-in pricing that leaves no surprises. Instant pricing may be obtained on smartphones and tablets simply connecting via http://canadaseafood.foodcareplus.com. Being fully integrated in its freight pricing management platform, the pricing tool will also advise when using full container load shipments would become more favorable pricewise in the near future.

Foodcareplus aims for deliveries within 72 hours after arrival in Europe, among the fastest service in the market. In order to realize the 72 hours delivery window, the Halifax operation will be pre-inspecting all paperwork and documentation before the cargo is shipped into the Antwerp facility. The first shipment of the weekly service with a short transit time of approx. 10 days is organized to leave Canada mid-June arriving no later than beginning of July, 2015 in Europe.