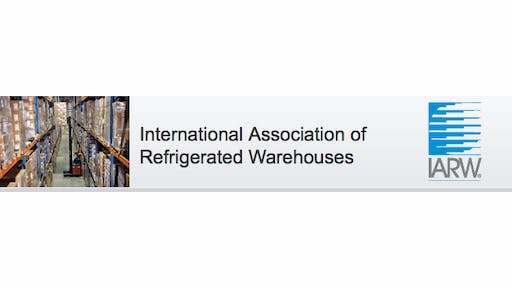 The International Association of Refrigerated Warehouses (IARW), a Core Partner of the Global Cold Chain Alliance (GCCA), released its 2014 Global Cold Storage Capacity Report on December 23, 2014. The report shows that the total capacity of refrigerated warehouses was estimated at 552 million cubic meters worldwide in 2014, an increase of 92 million cubic meters (20 percent) over 2012.

Written by Dr. Victoria Salin, a professor in the Department of Agricultural Economics at Texas A&M University, the 42-page report includes analyses on growth trends in global capacity, market development indicators, and characteristics of refrigerated warehouses around the world.

Cold storage capacity has shown a growth rate above 5 percent per year during a sustained period of time in 17 countries. The long-term growth rates are highest in India, China, and Turkey.

Capacity in 13 countries grew faster than 10 percent annually since the financial crisis of 2008. Countries leading the growth rates since 2008 are Turkey, India, Peru, and China.

The survey found that household income is the main driver of global growth in refrigerated warehousing. The increase in household purchasing power is accompanied by changes in preferences favoring large-scale shopping formats such as supermarkets and hypermarkets.

The market share of modern retail sales is 50 percent or greater in most of the large emerging markets (Brazil, Russia, India, China, South Africa and Turkey) and is growing approximately 10-12 percent per year. Those markets also have the most rapid expansion in refrigerated warehouse capacity.

“While retailing sectors are the direct business connections between temperature-controlled warehousing and consumers in any country, the status of the transportation system is an enabling condition for both retailing and distribution,” Salin says. “Market penetration of the refrigerated warehouse industry in the surveyed countries was found to be positively associated with the transportation quality index published by the World Economic Forum.”

The 2014 IARW Global Cold Storage Capacity Report is available to IARW members as a benefit of membership and for a fee to nonmembers. To download this e-publication visit the GCCA Online Store at www.gcca.org or contact IARW at (703) 373-4300.