The time- and temperature-sensitive reefer cargoes that have been delayed on vessels sitting outside the breakwater in LA/LB are deteriorating quickly and shippers are counting their losses by the hour. 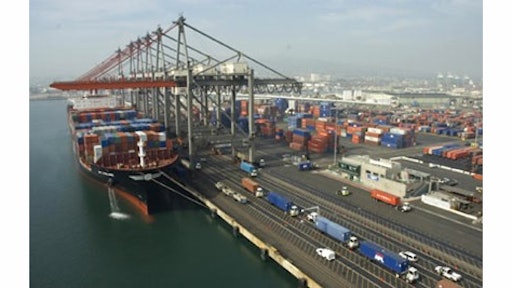 As of this morning, drayage drivers at Pacific 9 Transportation agreed to return to work, thanks to talks facilitated by Los Angeles Mayor Eric Garcetti, but drivers from five other drayage firms in the Port of LA/LB area—Pacer Cartage, Harbor Rail Transport, QTS Inc., LACA Express and WinWin Logistics—remain off the job.

Meanwhile, proposed congestion surcharges are also on hold, after shippers and the Federal Maritime Commission pushed back strongly against ocean carriers seeking a $1,000 per FEU surcharge on boxes imported/exported through West Coast ports.

The breakdown in ongoing contract negotiations between the ILWA and waterfront employers couldn’t have come at a worse time and shippers and carriers both are scrambling to divert cargo to other ports and modes of transportation. An earlier than usual peak shipping season helped get holiday merchandise in and on its way to DCs and store shelves already , but there are still plenty of consumer goods that could be impacted by the current labor unrest along U.S. West Coast ports.

Among the hardest hit right now are perishable shippers. The time- and temperature-sensitive reefer cargoes that have been delayed on vessels sitting outside the breakwater in LA/LB are deteriorating quickly and shippers are counting their losses by the hour. Even shippers of live Christmas trees are being affected—Bah, humbug!