The Cold Train Express refrigerated rail service has been squeezed to one train a day by increased rail traffic caused by a surge in North Dakota's oil and coal trains. 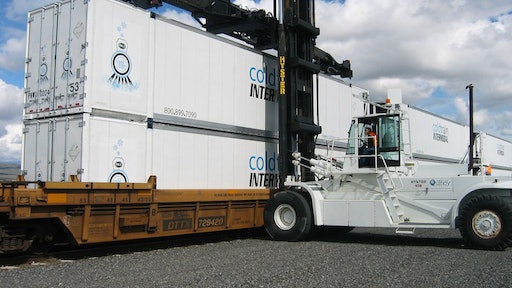 Quincy's refrigerated rail service has been squeezed to one train a day by increased rail traffic caused by a surge in North Dakota's oil and coal trains, said company officials. Delays and schedule changes have doubled the Cold Train's delivery times to six days and greatly increased fuel and equipment costs, they said.

The company said customers have canceled most shipments of fresh fruit and produce, which accounts for 70 percent of Cold Train's business.

Cold Train, a key link in delivering North Central Washington fruit and produce to east coast markets, said BNSF has given priority to high-income oil-and-coal customers, a situation that's "resulted in millions of dollars in operating losses and millions of dollars in capital investment losses, both of which are simply unsustainable" for the 4-year-old Cold Train company.

BNSF Railway disagreed. "We are not providing favored service for oil over other commodities," railway spokesman Gus Melonas said Friday. "We were disappointed to hear they (Cold Train) were suspending their operation, as we had been working with Cold Train for the past few months to provide them with options that would allow them to continue to operate this service."

Melonas said increased volumes across the railroad's northern lines have required schedule changes that have affected some customers. But rail service in Washington and along the company's Northern Corridor is improving, he said, as the company adds new locomotives, improves track conditions and hires new employees. The railway could hire up to 600 new employees in Washington this year, he said.

"The intermodal concept has been proven to be a real success," said Connelly. "We'll be looking for another operator who can make this work."

Rail Logistics, parent company of Cold Train, announced in March that the refrigerated rail company would be sold to a Michigan railroad company. But that sale never went through. "They may have seen some of the problems ahead," said Connelly.

Cold Train said Thursday that scheduling issues with BNSF began last autumn as congestion along the Northern Corridor began affecting the railway's on-time percentages. The railroad's on-time rates dropped from an average of over 90 percent to less than 5 percent between November and April, said Cold Train execs.

The shipping company said BNSF announced on April 24 that intermodal service from Washington, which includes the Quincy refrigerated trains, would be cut to one train a day and that service would be slowed.

Cold Train's suspension of service will "will leave many Washington State shippers in the precarious situation of having to scramble to find other transportation options to cargo eastbound, such as long-haul trucks," said Cold Train officials. That could leave growers and producers "at a competitive disadvantage and create supply chain problems," they said.

By late 2013, Cold Train had a fleet of 400 refrigerated containers and was providing service six days a week to 24 states in the Midwest, East Coast and southeastern U.S.