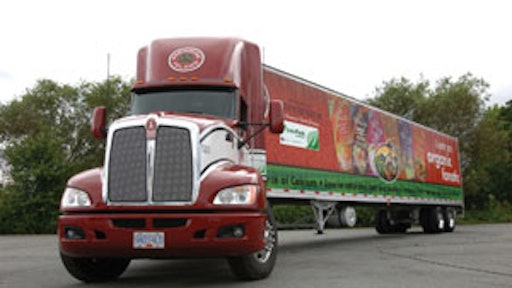 The price for a gallon of diesel fuel is high--and there's no relief in sight.

This makes running a reefer's diesel motor at the dock extremely expensive, especially when the motor has to be on for 10 hours a night, keeping the box cool as workers load it up for the following day's deliveries.

Hybrid diesel/electric technology can lower fuel consumption by allowing reefers to plug into a warehouse's electrical supply during that waiting period and power an electric motor in the reefer, in order to keep it cool. In addition to curbing fuel usage, dangerous emissions are also eliminated at the dock.

Hybrid refrigeration units have been gaining in popularity as prices at the pump have risen. These systems work on a unique diesel-electric platform, as opposed to conventional systems. Conventional refrigeration units are mechanical--a diesel engine in the unit directly drives the unit's compressor and a series of belts and pulleys, which in turn drive fans and the alternator.

With hybrid refrigeration units, many of those moving parts are no longer required. The diesel engine only does one thing--when the reefer is on the road, the engine drives a high output electrical generator.

It is this generator that generates the power to run the refrigeration system's components, such as the compressor. In addition, with a hybrid refrigeration unit, it's easy to use AC power when a reefer is parked at a dock. Conventional refrigeration units can also be converted to run off of electric current instead of diesel fuel, however an electric motor needs to be added to the unit to take over the job of providing the mechanical force that the diesel engine would provide.

"Clearly they're starting to get more popular now. Over 60 percent of the reefers that we sell today have the electric option," notes Tim Ryan, product manager, for diesel powered truck units, for Thermo King Corp., Minneapolis. "In 2008 our volume of electric standby units has risen very significantly and I fully expect that trend to continue into 2009."

In addition, companies are also updating their facilities in order to utilize the hybrid refrigeration technology.

"A lot of the big grocery chains are looking for ways to save on energy costs and they are equipping their warehouses with the electrical requirements on the dock doors to run these hybrid units," notes Lance Wingfield, vice president of marketing for PLM Trailers, Dallas.

Dave Kiefer, product manager for Carrier Transicold, Farmington, CT, has seen the same trend. "We started to roll out our hybrid units a few years ago and now that you're seeing what's been happening with the price of diesel, the case for electrical standby is becoming clearer."

"The savings can be as much as 75 percent per hour when you're operating on electric vs. diesel," says Thermo King's Ryan. "What's cheaper? Four dollars a gallon for diesel or 95 cents for a kilowatt hour of electricity?"

Carrier's hybrid refrigeration units, for all intents and purposes, functions like a big refrigerator when the truck is plugged into a DC's power supply. Once a unit is unplugged from the facility, the driver runs the diesel engine and the generator unit attached to it generates electrical power which the reefer runs off of, just as if it was still plugged into the wall.

"If you have the ability to stop and plug into some electric power somewhere along the route, you can also do that and save yourself a lot of fuel," says Carrier's Kiefer. "We looked at the seaborne container when we developed this. Reliability is the key--it can't break down on the ocean, after all. So we basically looked at that architecture and designed an all electric unit that goes on a trailer instead."

Paradise Island Foods is a dairy manufacturer located in Nanaimo, BC. The company delivers its cheese and dairy products all over Vancouver via its private fleet of seven delivery trucks. Recently, the company was looking for ways to curb its fuel spend and also reduce its carbon footprint. Thanks to a grant it received from the Canadian government, it has been replacing its fleet of reefers with Carrier's hybrid refrigeration units and the company has had some pretty spectacular results.

"We've done a lot of hard data testing and we've tracked every gallon of fuel that's gone into the reefers," says Jason Kosubal, operations manager for Paradise. "With our costing to run that unit on diesel versus running it on electric, we've determined that it's actually 90 percent cheaper for us to run on electric for an hour than it is to run it on diesel."

Paradise's drivers make their deliveries during the day and then come back to the facility at night, where dock workers reload it and stage new product for the driver, who picks it up the next morning. Before its fleet was switched over to the hybrid refrigeration units, reefers were running for eight to 10 hours straight on diesel fuel to maintain their cold temperatures. Because the reefers are now plugged into the building's electricity, the wasted fuel issue has been eliminated.

Kosubal is quick to praise the savings in maintenance costs with the hybrid refrigeration units. "There's about half the moving parts that a regular diesel reefer has and that means way more uptime for our fleet, which translates into more productivity."

And, with the hybrid refrigeration technology, dangerous emissions are completely eliminated at the dock.

Another problem that has been eliminated is noise pollution. Kosubal says Paradise experienced a big residential build up around its facilities over the past few years and in the past received complaints about the noise from neighbors. Now, with the hybrid refrigeration units in use, it hasn't received any complaints because the units are extremely quiet in electric standby.

"It's actually about 60 percent quieter than the diesel engines. The neighbors love it."

Another method companies can use to save reefer fuel costs is through the setting of the microprocessor that controls a reefers' temperature. According to the experts, many drivers are running their reefers in "continuous run" mode when they shouldn't be.

In fact, they should be running them in automatic start/stop mode. In this mode, the reefer is sitting at the dock at its temperature set point. If the temperature rises, the engine kicks back on and cools the refrigerator back down. Then the engine shuts off again.

"We've had fleets that say they're 100 percent automatic start-stop and then I do a download from the data recorder and you find a three week period where the unit was running in continuous run, until somebody realized it was the wrong setting," says Carrier's Kiefer.

He and other experts say that fleet managers need to make sure their drivers are trained to know what the settings on the unit should be. They should be aware of what the parameters of settings are, based primarily on what cargo is in the reefer.

Products such as lettuce typically need a very narrow temperature window. Companies should set it at 34 degrees, plus-or-minus a few degrees in the load.

If the load is candy, that's a less narrow window. A company would want to set an upper limit of 75 degrees and a lower limit of 35. As long as the reefer is within that band, it won't run.